It’s worth it to jump into the unknown when the path you’re headed down is leading toward certain doom.

Last month, a transport truck filled with hundreds of week-old piglets was barreling down an Iowa freeway, en route to a feeding facility. There, they’d spend the next six months being fattened up before being shipped off to a slaughterhouse. 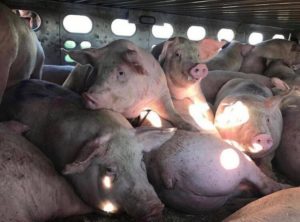 But fate had something else in store for Marge.

She must have fallen out of the transport truck (we like to think she broke out on her own) and soon afterward, she was discovered by area animal control officials. But she’d suffered some pretty horrific injuries during the ordeal, including a fractured jaw with scrapes and bruises. They figured the most humane thing to do would be to euthanize her.

But a local animal rescue group got wind of her plight and contacted the Iowa Farm Sanctuary to see if they had space to take her in. They didn’t, but when co-founder Shawn Camp learned she’d be euthanized within the hour, she agreed to take Marge until they could find a permanent home. 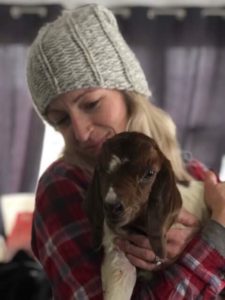 But they wouldn’t be home when the volunteers arrived with Marge, because she and her husband had to take another animal to the vet. So they left the door unlocked and put out some food, water, and bedding for Marge so she could settle in until they got back.

They also figured she’d be traumatized for her ordeal and need some company, so they left her a little friend to keep her company: a stuffed pig.

When they returned home from the vet, here’s what they found: 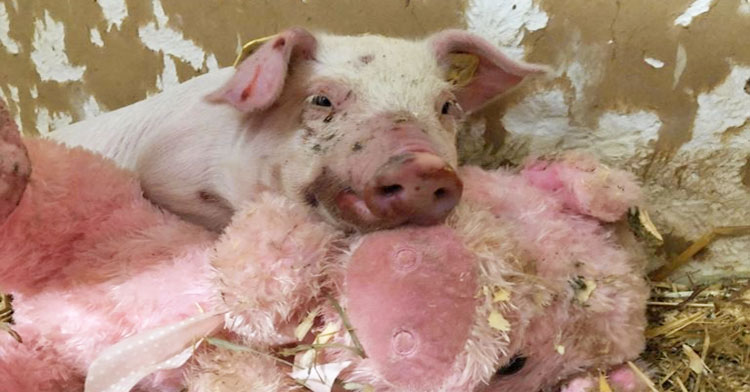 It appears Marge and her new friend had formed a fast friendship! Marge wasn’t even interested in food and instead curled up with her stuffed pig, her greatest source of comfort. 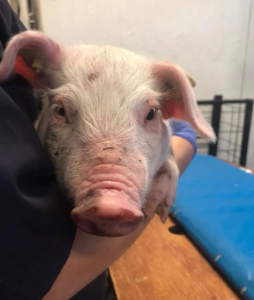 Just weeks ago, Marge appeared to be destined for slaughter. Now, yet another rescue group has stepped in. You’ll be happy to know she’s one of the newest residents at Spring Farm Sanctuary in Long Lake, Minnesota, where she’s enjoying a new lease on life, this one filled with all the love and freedom an adorable little piglet could ever want.

… they thought this little piglet would be a good fit at Spring Farm Sanctuary, and boy were they right … She is safe at home now, settling in and making new friends. Let’s just say we are completely in love. 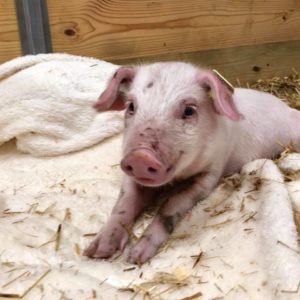 Spring Hill is also asking for help to offset the costs of caring for Marge, including food and any other medications she might need. To make a donation, click here.

Congratulations on your new home, sweetheart! Share to spread thanks to everyone who was involved in her rescue and rehabilitation.