We all had those friends when we were kids (and maybe even now) whose houses we’d rather spend time at than our own, because they always had better toys. There’s no way to know for sure, of course, but it’s a pretty safe bet that it’s the same in the dog world.

It’s also pretty safe to say that every dog in the neighborhood wants to be Anitta’s favorite playmate, because she has something no other dog has: a massive, custom-made slide! 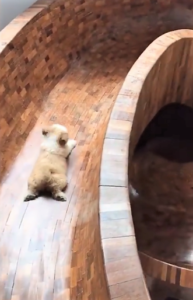 Early last month, Amei Saber posted a short video on Facebook of her little princess zooming down what looks like an elaborately designed spiral staircase. Except it doesn’t have steps because that’d seriously hurt. So maybe a better analogy would be one of those big slides you see at water parks, except this one doesn’t have water, either. Maybe it’s best if we just use a gif:

She zooms past the first curve, scrambles to her feet to pick up some more speed, then gives herself a little shove to make it past the second.

It’s pitch black down there! Is this actually some kind of fancy garbage chute that leads down to the basement? Annita doesn’t know, and she’s not going to stick around to find out. So she slams on the brakes, then scrambles back to the top, her toenails making little clicking sounds on the hardwood surface. Does it get any cuter than this?! 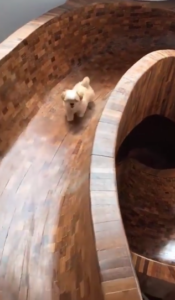 This video’s been out there for less than two months and it’s already racked up tens of millions of views. Which shouldn’t be all that surprising, because who doesn’t want something like this in his or her own home? One viewer suggested Anitta looks like a Shih Tzu, a toy breed known for being playful, and added that she wished “we could all have a slide in our homes like this for our babies.”

For our babies? How about for their human parents?!

Seriously, who came up with the design for this thing, and where can we place our orders?

Watch this cutie pie get in her daily dose of cardio in the clip below, and share if you agree this is the most spoiled pooch ever!