When two-time Olympic runner Shevon Nieto unexpectedly retired, it wasn’t because she was giving up. She was putting love first — and paving the way for another dream.

In 2016, the Jamaica native was training for a third run in the Olympics after competing in Athens and Beijing. But, her life changed forever when she got the call that her boyfriend (now husband), Jamie Nieto, had been in an accident. That’s when she stepped up to a new challenge. 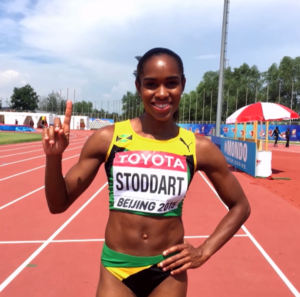 A two-time Olympic high jumper himself, Jamie had been coaching Olympic hopefuls back then. During one session, he slipped while jumping and hit his head. He was paralyzed from the chest down. Shevon decided to put her Olympic dreams aside to push and encourage Jamie throughout his recovery. 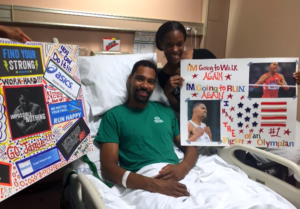 The couple was told that walking was out of the question for Jamie, but on their wedding day, he took step after step down the aisle! Today, he credits how far he’s come to his wife, who never doubted him.

“I married the woman that storybooks talk about,” Jamie said.

“It feels really good to win your races, you know, but it’s the hardest races, those are the best ones,” Shevon added. “That win is worth everything.” 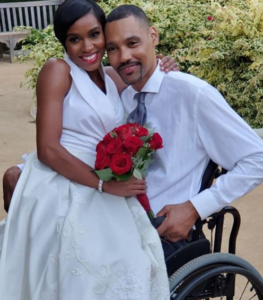 So, when the time came for Shevon to chase another dream, Jamie couldn’t wait to cheer her on. During his recovery, Shevon found comfort in music. This passion took her all the way to the “America’s Got Talent” stage, where she poured her heart into singing “Through the Good and the Bad,” an original song she’d written about her relationship with Jamie.

There was no audience because of COVID-19, but Shevon made her mark, bringing judges Sofia Vergara and Eric Stonestreet to tears. And watching offstage, Jamie was bursting with pride. This is clearly a woman of many talents! Not only is she an incredible athlete, but an amazing singer. Most importantly, though, she is Jamie’s rock. And no matter what happens in this competition, that will never change. Good luck, Shevon!