It’s a police officer’s duty to serve and protect, but we often see them going above and beyond for their communities.

From rescuing trapped animals to sledding with kids, cops have proven over and over that they truly enjoy helping those they serve. That’s why when officers from the Cape Coral Police Department heard someone had stolen an elderly man’s bike, they decided to do more than just pursue the thief.

Robert, who is in his 80s, called the police in February when his bike got swiped from a Winn Dixie store in Cape Coral, Florida. Officers Ken Cody and Guang Song responded to the call. They learned Robert didn’t have a car and that the bike was his only form of transportation.

“After taking the report, both officers couldn’t just allow the victim to be without any way to get around,” the department wrote. So they decided to go to a nearby Walmart and buy him a new bike! Cody’s body cam recorded the sweet moment they delivered Robert’s brand-new ride. 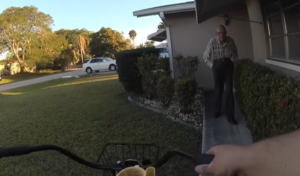 “Robert,” Cody calls out as he approaches the man’s house. “I got something for you, buddy.”

Robert checks out his awesome new set of wheels and Cody helps him adjust the seat. Song also takes the time to explain how the brakes work. They even bought him a lock to make sure this bike stays safe and secure! 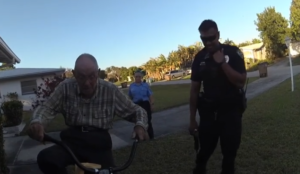 Just before they leave, Cody assures Robert they will still be searching for the bike thief. “You guys are the greatest in the world,” a passerby says as the officers make their way to their cars. “I’m almost crying. God bless you.” 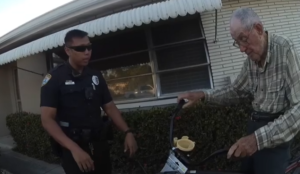 The department shared the video on Facebook, where it got thousands of views. People couldn’t get over the officers’ kindness, writing to express their love for the thoughtful gesture.

“Very, very touching story! We are so lucky to have such kind-hearted officers,” one person wrote.

Another added she’d personally witnessed Robert enjoying their gift: “I’ve actually seen this gentleman riding his bike…aren’t you all something!”

The world may not always be such a friendly place, but these sweet law enforcers are enough to restore anyone’s faith in humanity. Check out the footage from the body cam below, and share with anyone whose day needs a little brightening.

Field Training Officer Ken Cody and Officer Trainee Guang Song took a report of a stolen bicycle from the Winn Dixie in south Cape Coral. The victim was a male in his 80s and the bicycle was his only mode of transportation. After taking the report, both officers couldn’t just allow the victim to be without any way to get around so they went to Walmart and bought him a new bicycle. They delivered it to his home and made sure the seat was adjusted before leaving. A citizen took the time to share the incident on Facebook. Here is the video of the officers delivering the bicycle. The investigation is ongoing into finding the suspect that took the bicycle.