Nike spent 1,553 days hoping and wishing for this moment.

The little boy was 4 years old when he entered the foster care system. After one failed placement, he met David and Kristi Schwartz, who ended up fostering him for years. To Nike, they and their daughters, Kylee and Lily, were his real family from day one — and the feeling was mutual. 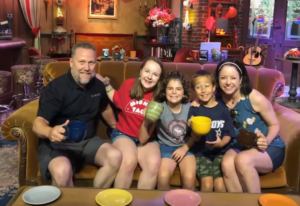 The Texas parents had already fostered nine children and adopted Lily before Nike came into their lives. The boy had been taken out of a neglectful situation and found his safe place with the Schwartz family. His foster parents knew early on they wanted to keep him forever, but spent years fighting for legal custody.

That’s why they’ll always remember February 17, 2020, as one of the happiest days of their lives. More than 300 of their loved ones filled the courtroom at Collin County Courthouse, cheering as Nike was officially adopted. They all wore shirts with the message, “May the Schwartz be with you 2-17-20,” including the 8-year-old, who celebrated with a happy dance. “Finally,” read the back of his shirt. 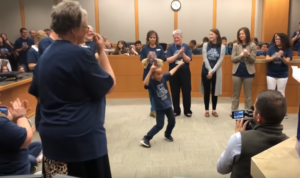 The ceremony became even more special with an appearance from Batman and signed goodies from Nike’s favorite team, the Dallas Cowboys! It was everything he imagined and more. But the best gift was knowing he now officially belonged to David and Kristi.

“I just believe in them,” Nike said. “I believe them.” 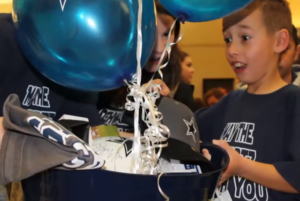 As for his parents, they’re still stunned by the incredible turnout.

“It’s a moment where you take an ordinary, everyday occurrence and make it into an extraordinary event,” David added. “We are so humbled.” 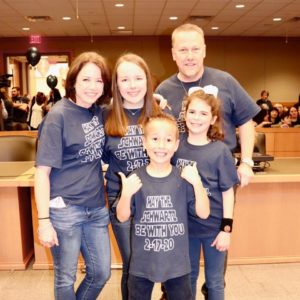 What a beautiful start to this family’s life together, though we know it really began the moment Nike’s parents welcomed him into their home. Congratulations, Schwartz family! We’re so happy for you!

Check out more heartwarming footage from Nike’s adoption below, and share in the celebration.