The man is a natural entertainer. Besides his incredible voice, the crooner is famous for handing his microphone to fans and spreading laughter with his sense of humor. He can even impersonate fellow celebrities, though he can’t always predict when they’ll show up to call him out. 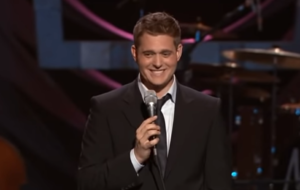 Years ago, Bublé decided to poke fun at his friend and fellow musician, Josh Groban, during a concert. He started with a dig at the singer, then mimicked his tenor voice by belting it out, opera style.

“I’d like to start by kicking Josh Groban’s little butt,” he joked. Then, as Bublé sang facing the crowd, Groban appeared on the stairs behind him, unannounced and not amused. The crowd, on the other hand, went wild as two of their favorites joined each other on stage. 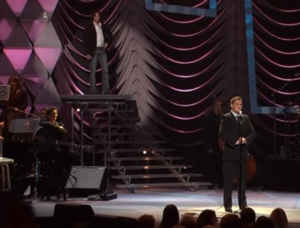 With a little coaxing, Bublé convinced Groban to join him for a quick impromptu duet, with both singers mimicking each other’s vocal styles. And it turned out surprisingly well — so well that millions gushed over their performance.

Could these two sound any better together? Whether they’re singing or taking lighthearted jabs at each other, we’re here for all of it!

Listen to the duo perform in the video below, and share to spread smiles!