As the smoke from California’s Camp Fire wafted into her home, Margaret Newsum began to worry.

Margaret had seen details about the fast-moving firestorm heading her way, but at 93, she had no way of evacuating from the Magalia, California neighborhood where she lived. Her caregiver was off that day, so Margaret felt hopeless and abandoned as she stood on the front porch of her home. 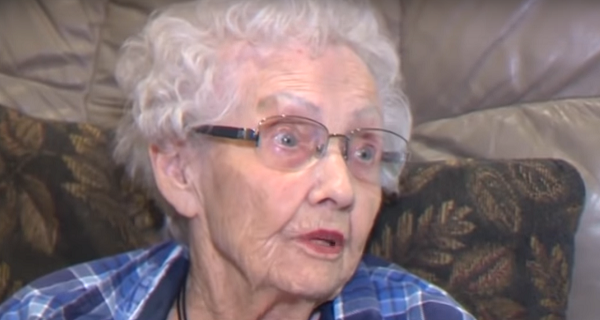 Dane instead finished his entire route, stopping to knock on doors and see if there was anyone there who needed help getting out.

“I tried to stop and help them and let them know that they were coming and make sure they were getting out,” Dane later explained. “She was my last stop. I probably went to 45 or 50 people to see if I could help them.”

Margaret was overjoyed to see Dane’s smiling face, describing the scene when his truck pulled up. “I went out and was standing on the front porch when this great, big, green monster drove up, and my dear friend was emptying the garbage. He said, ‘You’re not staying here. You’ve got to get out of here. Why are you still here?’”

Margaret explained that her caregiver was not working that day, and after trying unsuccessfully to reach them by phone, Dane looked at Margaret and told her to get her purse, because he was not about to leave without her. Breaking his company’s protocol, Dane and some others nearby helped lift Margaret up into the big green truck.

“They lifted her, and we scooted her on the seat and put the seat belt on her and made sure she was up there far enough so she wouldn’t fall out either side, and that was it,” Dane said. “We were on the road.”

During the five hour trip out of the danger zone, Dane and Margaret chatted amiably about their lives, and Dane admits that by the end of the journey he had a bit of a crush on the elderly lady. “I wish I’d known her when she was younger,” he said. “I would’ve married her, you know what I mean? It was the best conversation I’ve had in a truck ever.”

Margaret’s neighborhood was utterly devastated by the fires, and there’s no doubt that without Dane’s help, she would have died.  Who would ever think that salvation could come in the form of a garbage truck? Regardless of the mechanization, it was Dane’s empathetic nature and desire to care for fellow humans that saved Margaret’s life that day. We’re so grateful to Dane and all of the other heroes who emerge from the rubble of these devastating fires.

Please share this story to thank Dane for caring about his neighbors, and to encourage others to look in on their neighbors during times of trouble. You never know when someone could use a helping hand!