There are millions of animals in our world who’ve been abused, abandoned, and discarded as if their lives don’t even matter. Thankfully there are also kind people out there who work tirelessly to help these innocent souls.

One such man was walking down the streets of war-torn Lebanon when he saw a stray dog tied to a box. Homeless dogs are common in that country, but this dog was in such rough shape that the man stopped in his tracks and gathered the battered animal into his arms to find help. 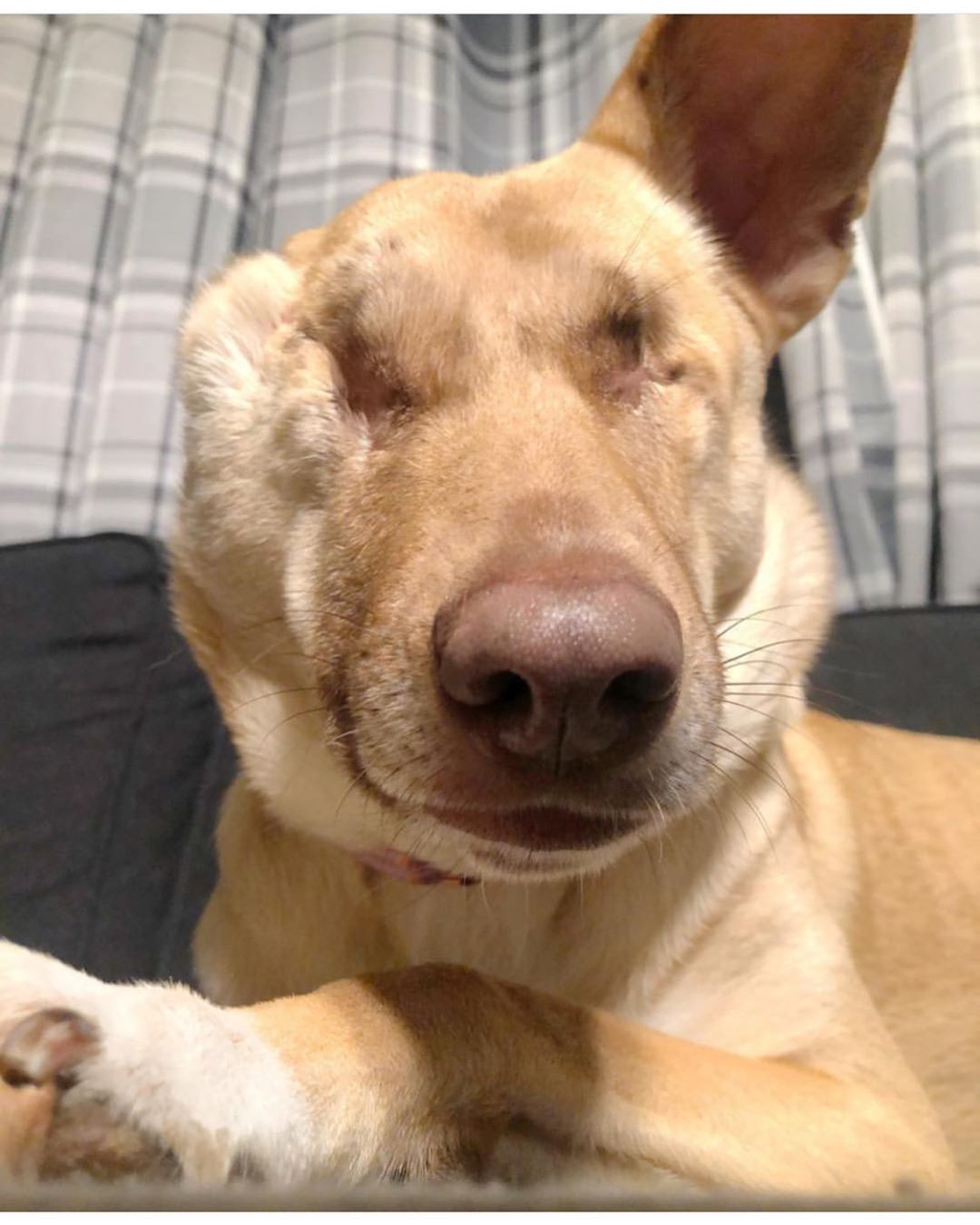 He brought her to Wild at Heart Foundation, a rescue organization based in the United Kingdom that aims to help homeless pets find their forever homes. The dog, who rescue workers named Maggie, was clinging to life by the time she made it to the vet’s office, and upon examination they could not believe the extent of her injuries.

Maggie was missing an ear. She was blind in both eyes and pregnant. Even more appalling, Maggie’s body was riddled with seventeen bullet holes from a pellet gun.  The rescue workers realized that all lives are precious, so instead of euthanizing Maggie they got to work rehabilitating her in hopes of finding her a loving home to call her own.

As fate would have it, when Wild At Heart shared Maggie’s picture and story on social media the perfect family happened to see the post. Kasey Carlin of London, England says it was her mother who first spotted the dog and felt compelled to bring her home from Lebanon. 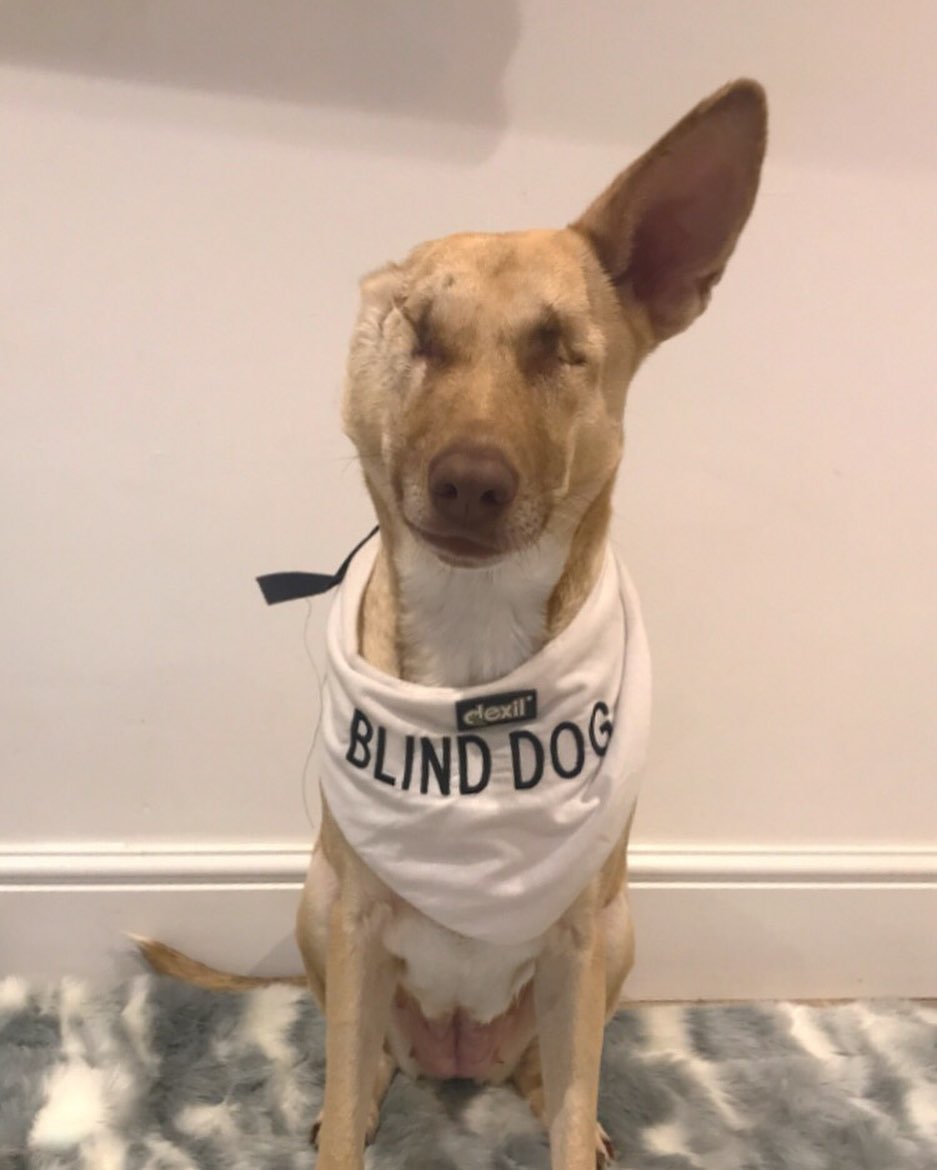 “My mum saw Maggie’s post and said we had to foster her,” Kasey explained. “I got home and saw the picture and agreed.” Once Maggie had undergone surgery and recovered for a bit she was ready to make the move to London. Kasey says that she had been going through a difficult time emotionally prior to meeting her new pet, but the moment she laid eyes on Maggie she knew that she now had something incredible to focus on. Still, learning to care for an abused and blind dog took some time.

“I was in tears when I met her at the airport,” Kasey said. “I got in touch with some blind rescue dog charities and ask what to do. They said map out the house for her room by room. But we sectioned off the kitchen and the first night she slept in her crate. I took her out to go to the toilet and it was the first time she touched grass.” 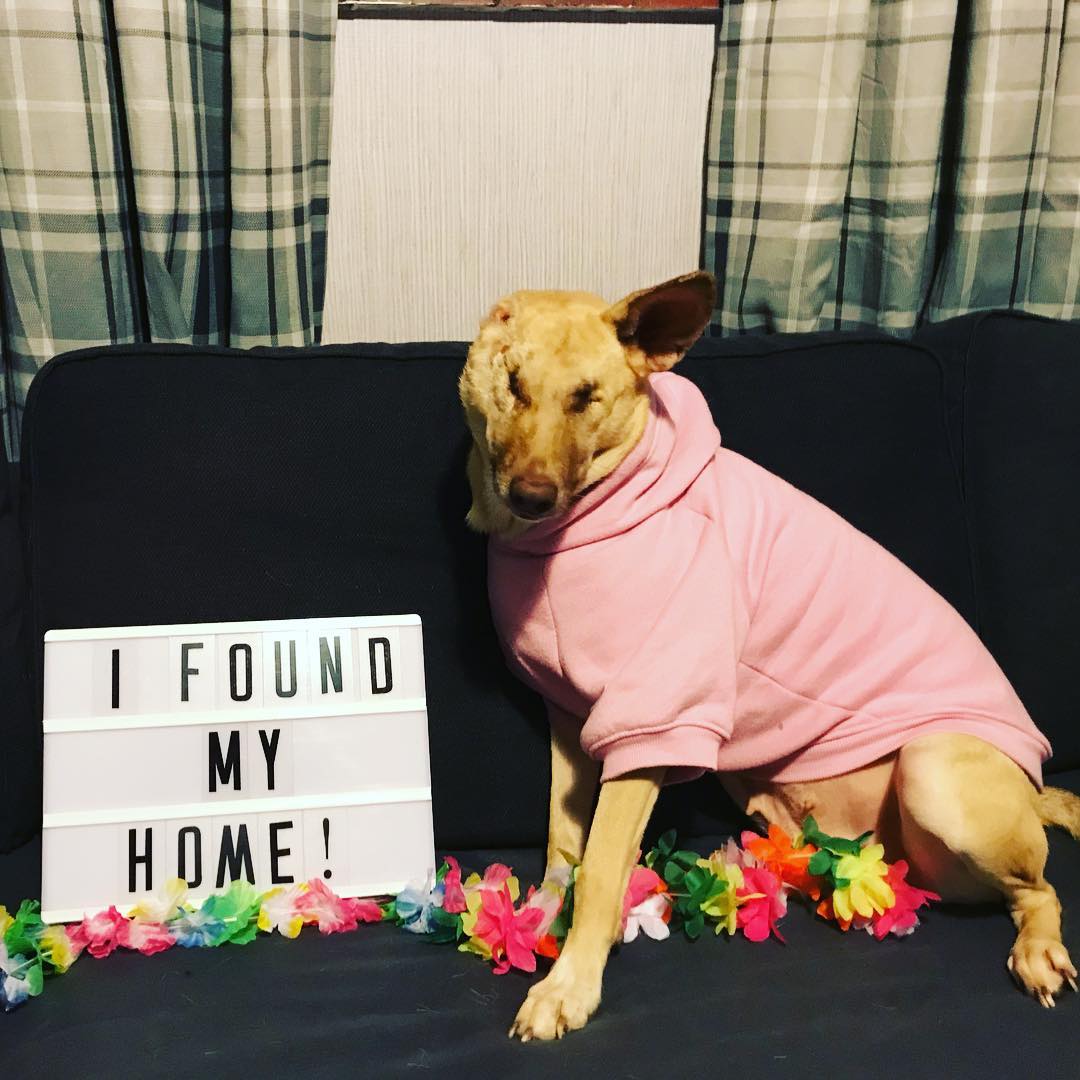 With Kasey’s help and guidance, Maggie began to flourish in her new environment. In spite of the horrific abuse she’d suffered at the hands of humans, Maggie’s temperament is nothing but sweet and affectionate. “She’s just brilliant,” said her smitten new owner. “She’s so energetic and bubbly. She walks off the lead and follows me around. “She must have been in agony with all she’s been through, but she never hurt anyone and she’s so loving.” 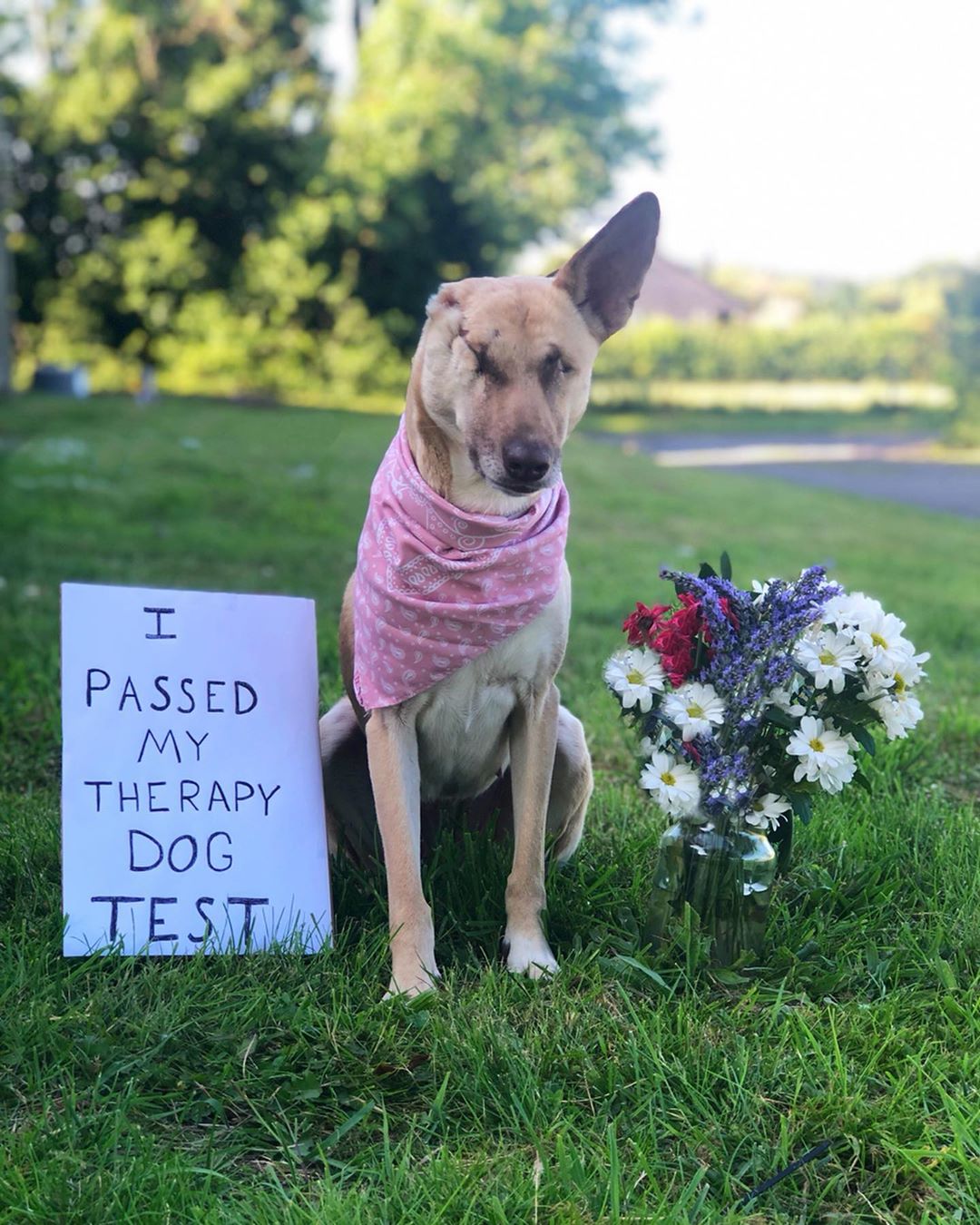 Kasey’s own emotional health improved right alongside of Maggie’s, and soon she decided to do what she could to help others through difficult times by enlisting Maggie as a therapy dog. She now visits a college campus twice a week to get love and pets from the students there, and soon she’ll be branching out to lift the spirits of hospital patients and others.

Kasey keeps Maggie’s fans up to date on the dog’s progress on her popular Instagram page, aptly titled “Maggie the Wonder Dog.” 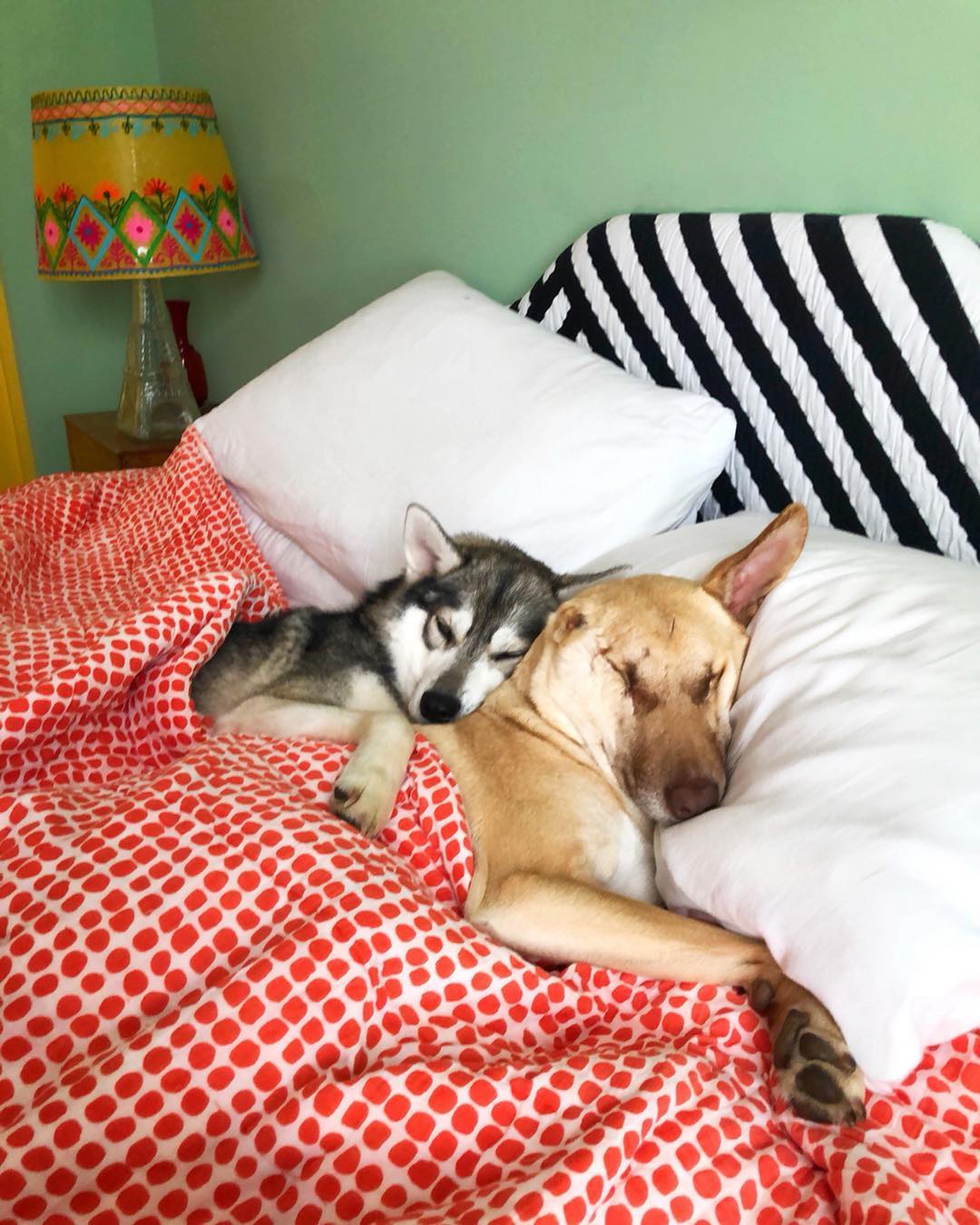 Maggie is now surrounded by love and kindness each and every day, which is the perfect ending to a story with such a sad start. Not only that, but her story of perseverance is one that instills hope in all of us, because if Maggie can find a way to love after what she’s been through, so can we.