Here’s a story for anyone who doubts the existence of love at first sight.

Actress Mackenzie “Mac” Coffman of Los Angeles, California lives in an apartment with her cat, an orange tabby named Simon. Mac recently noticed that Simon was spending hours perched on her window sill, gazing longingly across the alleyway at the neighboring building. Upon closer inspection, Mac discovered Simon was staring intently at another cat who lived across the way. 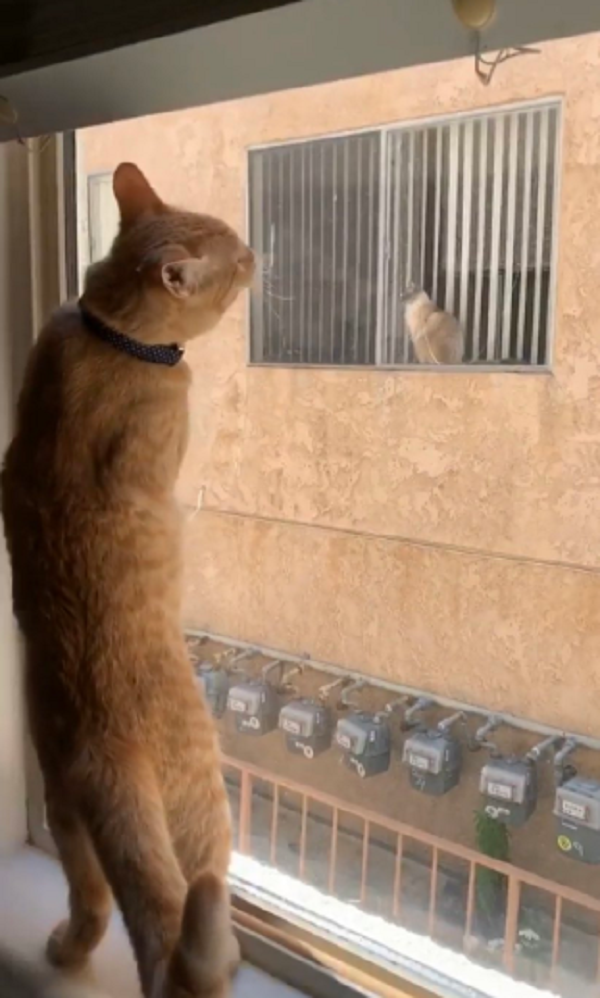 Mac thought this modern day feline version of “Romeo and Juliet” was far too cute to keep to herself, so she wrote a note for her neighbor and started taking pictures to share on her Twitter page. “My cat Simon is in LOVE with my neighbor’s cat and waits all day for him. Will keep y’all updated,” Mac told her 73,000 followers. 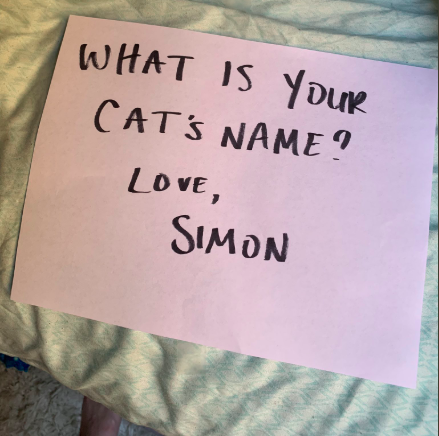 “What is your cat’s name? Love, Simon,” Mac wrote on a piece of paper and hung it on her window. She then sat back and waited to see what would happen. As it turned out, the person who lived across the alley also had a great sense of humor, quickly writing a note of her own. “Hi Simon, I’m Theo. Your my best friend,” the note said. 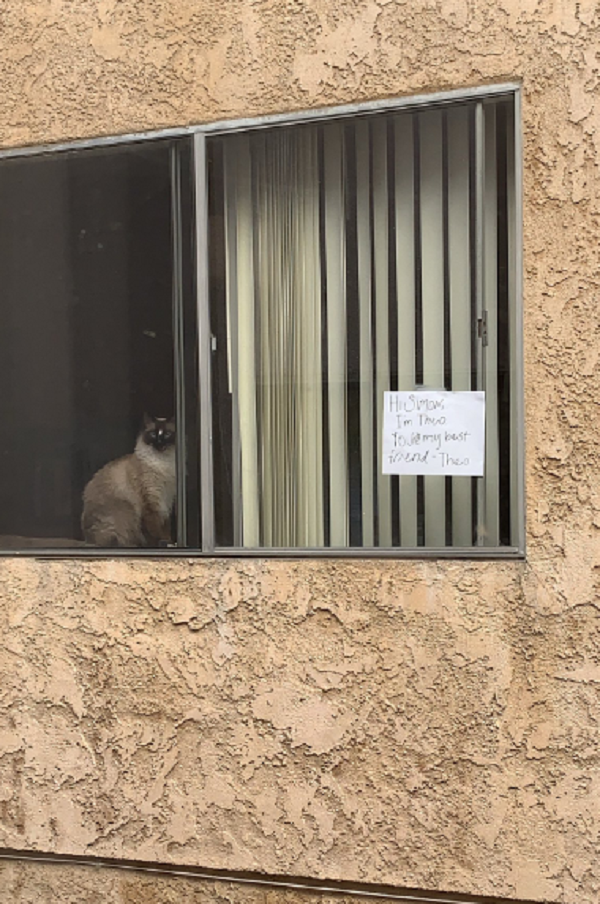 Mac overlooked the grammatical error, but naturally the people of Twitter weren’t quite so kind about Theo’s use of “your” instead of “you’re.” Regardless, the two cats’ relationship was off and running! Soon, Mac’s Twitter feed was exploding with people who couldn’t get enough of this feline romance story. She decided to let Theo’s human mom know about their newfound internet fame with yet another note in the window. 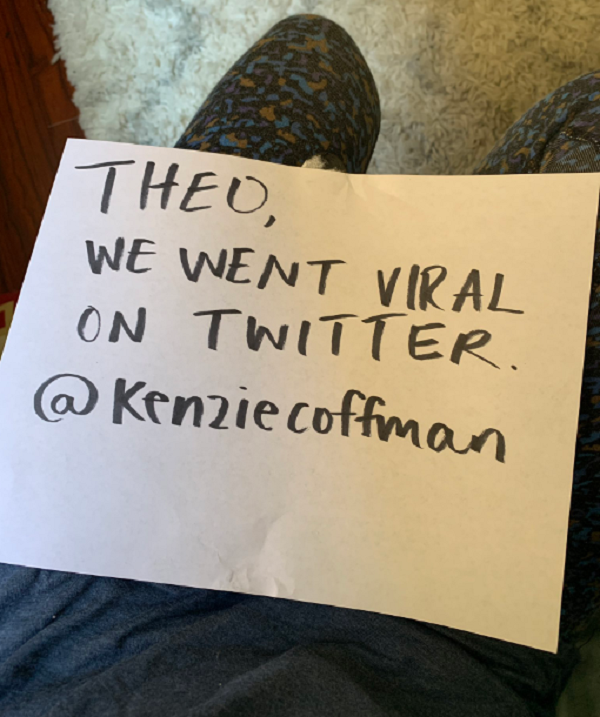 “Simon, we did it!” Theo wrote in reply. Theo’s owner had even created a spanking new Twitter account so that the cat could keep up with all of her new fans. She also noticed the criticism of her grammar in the first note, adding “Sorry for the spelling error. After all, I’m a cat” to her next correspondence. 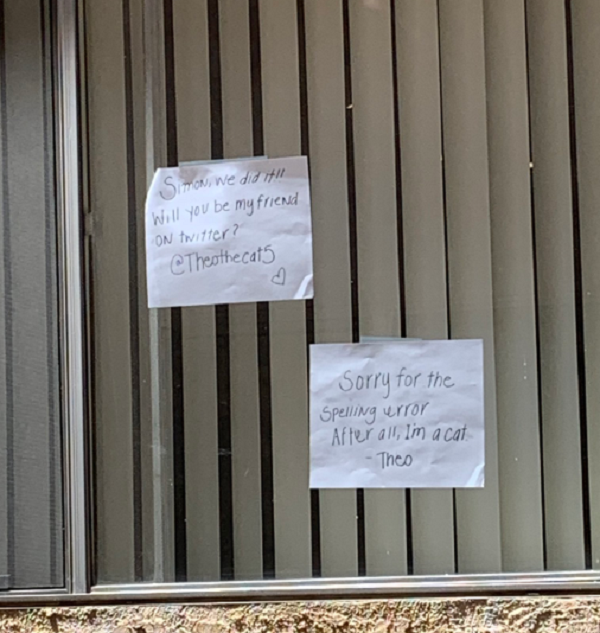 After establishing the fact that these two cats love one another, their owners did the next logical thing and arranged a date! Simon waited anxiously by the front door for his best friend to arrive. Once Theo arrived she was a little bit nervous about being in a strange place, but Simon was elated. He celebrated their new union by following Theo from room to room, sniffing her scent the entire time. 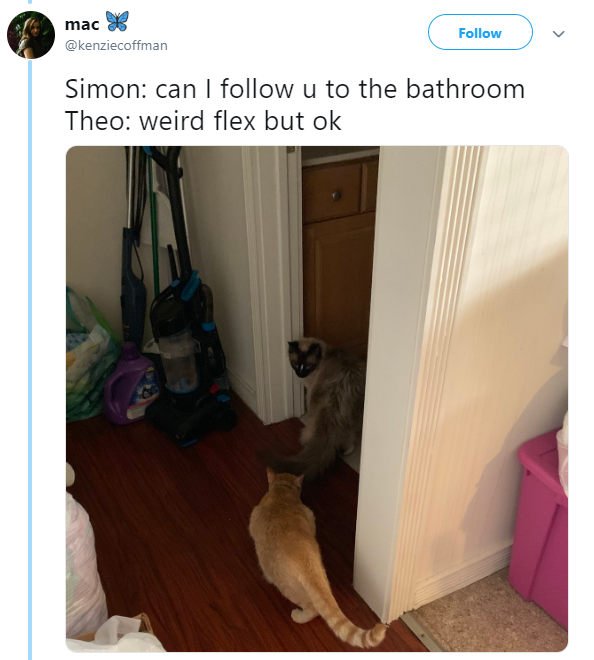 “Simon is following Theo around like a puppy,” Mac tweeted, eventually concluding, “We think it went as well as it can with cats! Only a couple hisses, no fights, and lots of butt-sniffs.” The human mamas even managed to squeeze in a photo of themselves, too. 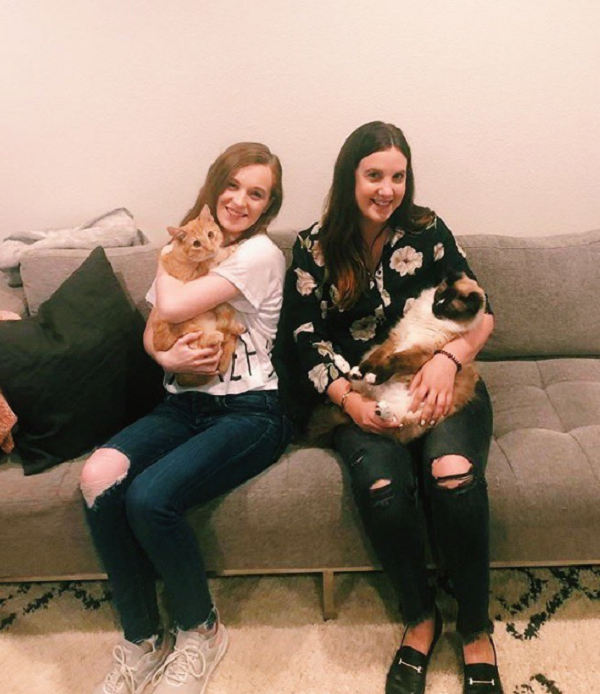 Only time will tell if these two lovebirds will live happily ever after, but this is pretty darn adorable no matter what happens. We just love that these two strangers met because of their house cats. We hear about people meeting at dog parks all the time, but how many other cats have brought two friends together like this?

Please share to say congratulations to Theo and Simon on their new friendship.