A woman named Lyndsay was at work one day when she heard something making a racket nearby. She climbed up a ladder in the warehouse and located the source of the noise: a baby starling squawking up a storm. She immediately called animal rehabilitation clinics for help.

She soon learned that starlings are considered to be an invasive species where she lives, so the shelters were reluctant to take Birdbird in.

Since Lyndsay already had chickens and other birds at home, she decided to care for the starling until he was old enough to be released. The only problem? Birdbird loved her so much that he decided not to leave her side!

“I think he knows that I saved him,” she said. “He definitely looks at me like his mom. I guess he feels comfortable. He sees me as like a safe place. He’s part of our family. He is our kid.” 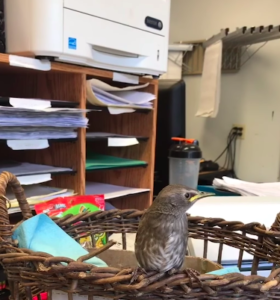 It makes sense! Birdbird grew up listening to Lyndsay’s voice, so naturally, one day he started to imitate her.

Songbirds and parrots are both able to mimic human voices, but Birdbird is extra special because he sounds almost exactly like his human mama! He likes to repeat whatever he hears her say, for better or for worse. “No cussing!” Lyndsay reminds him occasionally, but mostly he repeats sweet phrases like, “Give me kisses” or “I love you.”

“I never noticed how much he sounds like me until people were saying it. It’s not perfect but his speech is just unreal,” she said. 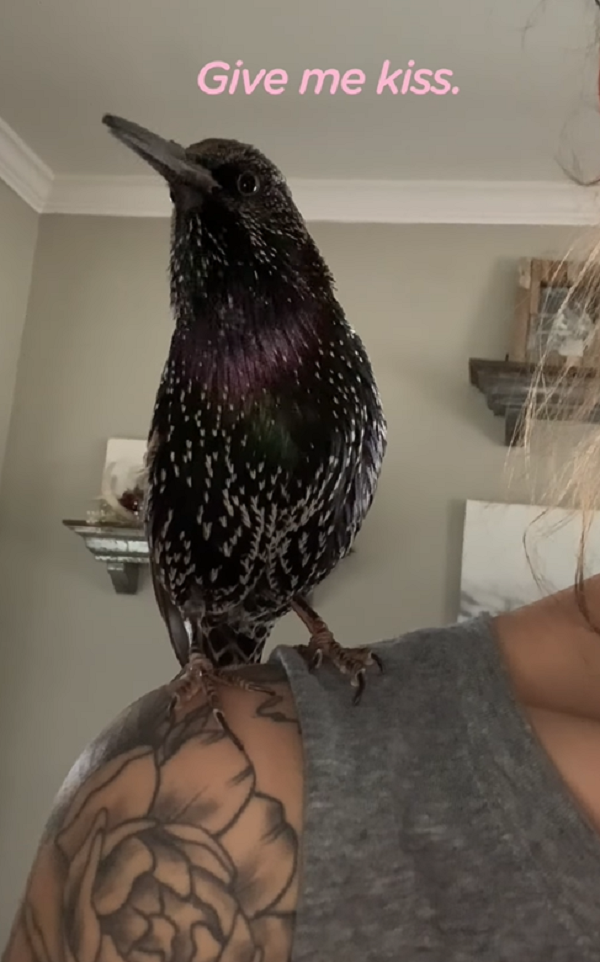 And that’s not all. “He picks up stuff from the TV, from my husband, me,” Lyndsay explained. “Now he does this creepy laugh, and I’m like, ‘Where’d you get that from? ‘Cause I don’t think I laugh like that.'”

The funny bird has had every opportunity to leave Lyndsay and return to the wild, but he has no interest in separating from his new family.

As for his mom, she said, “I wouldn’t trade him for the world.”