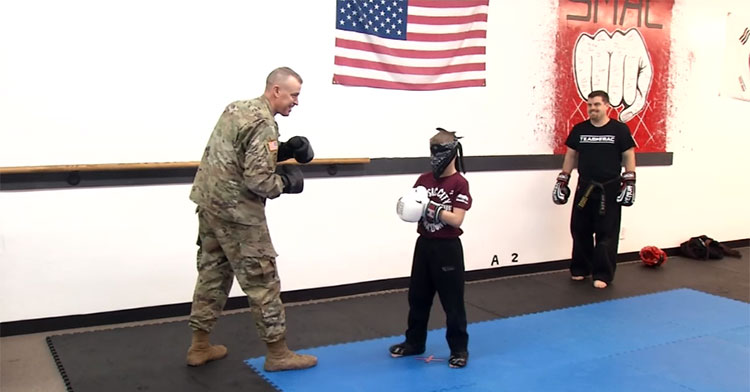 Deployed Dad Sneaks Up To Blindfolded Son At Taekwondo For H...

We never realize just how much the everyday moments with our loved ones mean until we have to go without them.

In May 2018, Staff Sgt. Rob Cesternino was deployed to Jordan and Southern Syria, serving with the Tennessee National Guard. His six children have gone through nearly a year’s worth of dinners, family activities, and nights without their beloved father. It’s been hard for all of them, but Cesternino’s youngest son, Luca, has been having an especially rough time. 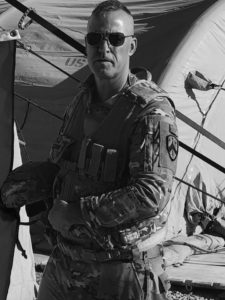 So when Cesternino found out he’d be returning home from active duty a few days earlier than expected, he knew it would be the perfect opportunity to make his 9-year-old’s year. With his wife Leah’s help, Cesternino plotted to surprise Luca at his taekwondo session on March 18. Luca was told he’d be sparring blindfolded with three different instructors… the last of which would be his dad. 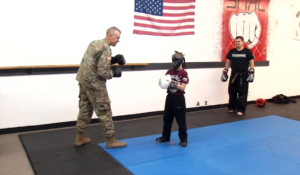 Luca had no idea he was throwing punches at his dad until he heard his opponent call him by his childhood nickname. Luca freezes as another person records the touching moment. “Daddy?” he asks. Then he pulls off his blindfold, looks up, and stares as his jaw drops. 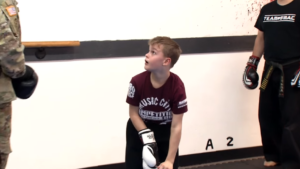 A split second later, Luca barrels toward Cesternino, wrapping his arms around his dad as he sobs uncontrollably. Claps and cheers ring out around the room as the two hold onto one another. 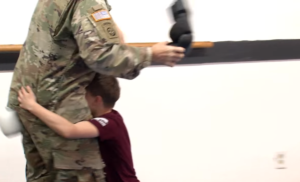 “You were such a big boy when I was gone. I’m so proud of you,” Cesternino tells Luca. We’re certain his little boy is just as proud of his dad. 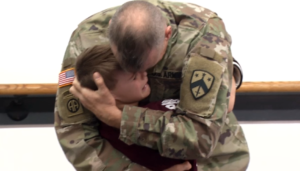 It’s obvious how long (and how much) the father and son have been wishing for this moment. They must be so excited to make up for all that lost time. Here’s hoping they get to enjoy each other’s company as much as possible in the coming months.

Watch as Luca’s regular Monday night turns into a memory he’ll always cherish. Share to celebrate Cesternino’s return and to thank him for his service.

I'M NOT CRYING, YOU'RE CRYING 😭❤️ A 9-year-old was surprised when his father SSG Rob Cesternino returned home from active duty tonight. When he was deployed, he served as a Lebanon city council member. Welcome back! bit.ly/2Th9Xsm

Oh, siblings... sometimes we want to kill them, other times we can't get enough of them. Whether you identify with this sentiment or not, one thing is for certain: At...

Woman Buys “Vintage” Roller Skates Online… Turns Out They Were Hers 40 Yrs Ago!

A childhood toy, a cool shirt, or even an old CD: We all have that one thing (or more) that we regret letting go. For Renée Forrestall, that "thing" was...

One of the best things about kids is that they are unapologetically themselves. One minute they're sitting quietly and, in the next, they're singing and dancing. That's exactly what happened...

She’s How Old?! Tiny Musician Blows Orchestra’s Audience Away With Her Flawless Solo.

There's a lot of pressure on a soloist who plays alongside a full orchestra, but Anastasiia Tiurina makes it look easy. At just 7 years old, she was put in...

You've never heard AC/DC quite like this before. In fact, it seems that Moyun of Hong Kong can transform just about any song into something brand new — all with...

“I Live Every Day To Its Fullest Extent.” 10 Quotes That Prove Olivia Newton-John Will Always Live On Through Her Words Of Wisdom. “My Memories Are Inside Of Me.”

Olivia Newton-John passed away recently at the age of 73. Many of us remember the singer and actress for her sunny, wholesome starring role in "Grease," followed by a string...

Blind Bison Becomes “Sanctuary Matriarch” After Cow Coaxes Her Out Of Her Shell.

Sometimes all it takes is one special friend to change your entire world. When Helen the bison was born on a farm in Sublimity, Oregon, the farmer planned to euthanize...

“Papa, I Love You.” Tears Flow When Kid Gives His 1st Home Run Ball To Grandpa.

One of the best things about accomplishing something is sharing that achievement with the person (or people) who helped us get there. That's why when Felix hit two home runs...

The Ultimutt Co-Pilot: Cyclist Explores The World With His Goldendoodle On His Back.

Many people refer to their dogs as their best friends, but for Cliff Brush, the sentiment is real. Cliff's BFF is a goldendoodle named Brodie, and together they're taking adventures...

“Is That Her?” There’s More To This “Singer’s” AGT Audition Than Meets The Eye…

When Emily Bland graced the "America's Got Talent" stage, she rendered the judges speechless with her unique singing voice — but not in the way you're imagining. During a small...

When you think you've seen it all, look a bit closer… Lucas Vaskange is an incredible artist with lots of work available to admire online. There's one piece in particular,...

“I Wanted To Come Out Of My Skin … They’d Utterly Embarrassed Her.” Dad Shares 5 Tips For Helping Your Daughter “When A Boy Makes Her Uncomfortable.”

This article originally appeared on AllProDad.com and reflects their mission and beliefs. I remember the first time my daughter came home from school and told me some boys made fun of her....

“I Can Do That? No Way!” Weatherman Gets Positively Giddy Over Touchscreen Monitor.

Double Dutch Crew Leaps Into The Hearts Of AGT Judges With Groovy Performance.

Jump roping isn't just a simple game for kids. When Waffle, a double Dutch crew, gets their hands on some jump rope, they're able to pull off some of the...

This “Funky Geezer” Is Taking TikTok By Storm With His Adorable Dance Moves.

To friends and neighbors, Woody Williams of Charlotte, North Carolina is simply Woody Williams, a retired graphic artist and amateur musician who plays in local clubs and bars. But online,...

What A Catch! Man Opens His Arms And Saves His Dog From A 4-Story Fall.

Thanks to this man's lightning-fast reaction, his beloved dog seems to have no idea she was ever in danger at all. After a two-week stint of working in a field,...

3 Ways To Fix A Broken Marriage

This article originally appeared on AllProDad.com and reflects their mission and beliefs. I recently read a story that can teach you how to improve your marriage. It’s about a husband who cheated...

“I’m Doing This For Him.” Twin Dedicates Powerful Original Song To Late Brother.

Musicians often draw on difficult times in their lives when creating their art. Wyn Starks is a singer and songwriter who grew up in Minneapolis, Minnesota, and currently lives in...

7 Things Your Kids Will Never Forget About You

This article originally appeared on iMOM.com and reflects their mission and beliefs. It’s funny the things kids never forget about parents, the random memories that have a permanent spot in our minds....