When Broward County Deputy Donnie Jackson walked into Dunkin’ Donuts to buy breakfast last week, a young boy tapped him on the shoulder and declared “this one’s on me.”

Jackson initially declined the offer, but the boy’s persistence and parents insistence caused him to give in to the kind gesture. The boy simply wanted to thank Officer Jackson for working a “thankless job” that police officers do every day.

Officer Jackson took to Facebook with the heartwarming story – which has since gone viral. As it turns out, a simple good deed, done for no reason, resonates deeply with lots of people.

Jackson posted this photo to Facebook with the caption below. 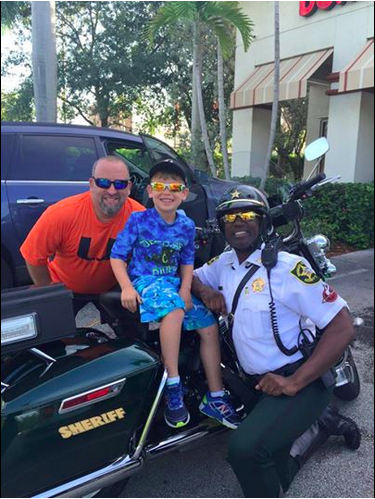 “I walked into this restaurant to get breakfast before heading to work my detail. As I enter, all eyes are fixed on me. I could only imagine what was going through the minds of the people inside the restaurant with all the negativity surrounding law enforcement officials. Nonetheless, I proceed to the cash register and placed my order. No sooner than my total flashed across the screen, this little kid said “I’m gonna pay for his.” Shocked and flattered. I declined and his parents insisted saying, when you walked into the door, he insisted on buying your breakfast because he appreciates the thankless job you do!
It’s a good thing I had on my Oakley’s because I really teared up. In closing, I really appreciated this kind act by this kid and the fine qualities being instilled in him by his parents!”

Watch the news report of this kid’s sweet gesture and consider how you can follow suit!