Many species of animals tend to avoid fights whenever possible because they know they could get seriously injured or killed. But when it comes to defending their offspring, it’s an entirely different story.

India is home to lions, tigers, leopards, and other big cats, and when wildfires flare up, they’re forced out of the forest and into areas that are already inhabited by humans and domesticated animals. Recently, one momma dog was forced to defend her baby when a leopard snuck up to the small family. 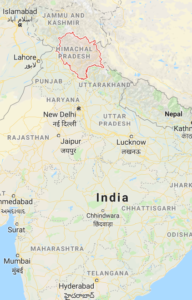 One evening, just outside a forestry office in the northern state of Himachal Pradesh, an official heard what sounded like a dog fight and went out to investigate, but just found a mother pup there licking her 2-month-old baby.

The momma was tending to some minor scratches and scrapes on the pup, but the forestry worker was confused about what had happened. No other animals were in sight. 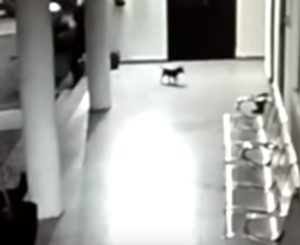 Fortunately, the office had a CCTV camera outside, so to get the answer, they reviewed the footage.

In it, the puppy’s just wandering around, seemingly alone. Suddenly, a dark figure separates from the surrounding shadows and pounces. The leopard’s massive compared to this little pup, and it’s completely defenseless. 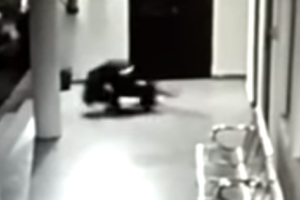 But a split second later, another shadow springs to life. The pup’s mom rushes out from a row of nearby seats and jumps into the fray, bravely launching her own attack against a leopard that’s at least twice her size!

Surprised, the leopard hastily retreats back into the forest, and the puppy scampers to safety down a nearby hallway. Watch the dramatic CCTV footage in the clip below.

One officer said the leopard’s leg appeared to have been injured even before this scuffle, and it probably attacked the puppy because it looked like easy pickings. Which it would’ve been, but it hadn’t counted on momma being nearby and having to come face to face with those notoriously protective maternal instincts.