You never know how you’ll react to a life-threatening situation until it happens. Some people freeze up in fear, while others rush to help without thinking twice.

After witnessing a van and truck crash into each other in Indianapolis, Indiana, dozens of strangers made an unspoken agreement to do the latter. 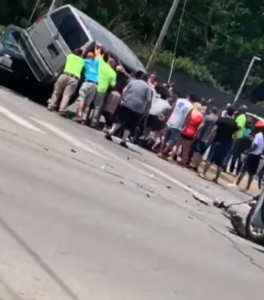 Laurie Collins was running errands near Keystone Avenue when she saw the crash on June 4. Then she noticed something even worse: A woman had flown out of the van and was now trapped beneath it.

Thankfully, the perfect group was around to save the day!

“All of a sudden, all these people came out of nowhere, all kinds of different people, and they were all trying to help together,” Laurie told WTHR. “There was no hesitation. There was no decisions. It was instant, like everybody automatically worked together.” 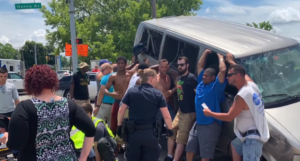 Together, some of them lifted the van, while others pulled the woman out of the way and tried to comfort her. “There was two people kneeling in front of her, like kind of stroking her hair and trying to get her to not move,” Laurie said.

The woman was quickly transported to the Sidney & Lois Eskenazi Hospital in critical condition, where she will hopefully make a full recovery thanks to her rescuers.

This story is a powerful reminder that people care about each other — even when they’ve never met! We’re sending our love to the injured woman and wishing her all the best as she heals. Thank you to each and every person who teamed up to save her!

Learn more about the rescue in the video below, and share the gratitude for these everyday heroes.