We all need a little help from time to time and this puppy is no exception.

Residents of Durango, Colorado, recently experienced a ton of snowfall in one week — 80 inches, to be exact. But that wouldn’t deter one small pooch from going next door to visit his canine friend… or so he thought. John Mace watched as his neighbor’s dog tried (and failed) to get through the massive amount of snow separating their yards, practically drowning in the white stuff. 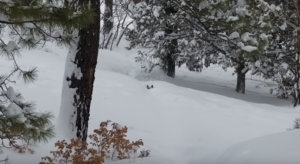 Only the pup’s ears and eyes were visible in the sea of white. Amused, John started recording, encouraging the dog to “come here!” The little guy just couldn’t make, it, though, so John enlisted the help of his own dog, Kona. 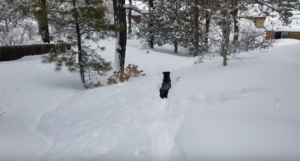 The bigger dog plows through the snow, even getting stuck herself in the deeper parts. She plops down and takes a break at one point, during which time her smaller friend furiously tries digging his way outonce more. 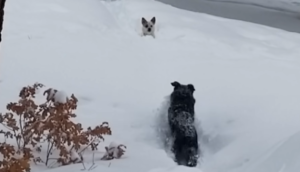 Finally, Kona reaches her buddy, who couldn’t be happier to see her. The cutie makes sure to thank his big pal with plenty of tail wags and friendly sniffs. 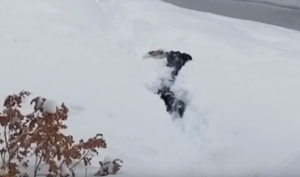 Having cleared a path on her way there, Kona then leads the small dog back to John, who can’t stop chuckling at their efforts. You’d think they were scaling a steep, snowy mountain rather than their own backyards! 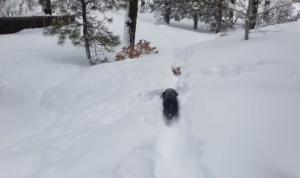 According to John, the little dog is less than a year old. He says this was the puppy’s first winter… and the second time he got stuck that day. It’s a good thing he has an older, more experienced friend looking out for him!

Watch as Kona expertly clears a path for her puppy neighbor in the video below, and share with all the dog lovers in your life.