It’s no secret that the new “Wonder Woman” movie is a massive hit. The origin story of “Wonder Woman”– A.K.A. Diana, princess of the Amazons– was instantly a box office triumph, garnering praise from critics and fans alike.

But it looks like there’s one group of fans who are particularly amazed by the tale: children.

Director Patty Jenkins recently posted a message one of the film’s producers sent her from an elementary school teacher. The teacher’s letter details 11 examples of the positive impact the movie had on her kindergarten classroom.

Jenkins tweeted the message saying, “This makes every hard day worth it.”

My producer just sent me this… ABSOLUTELY INCREDIBLE! This makes every hard day worth it. Thank you to whomever wrote it!!❤️❤️❤️❤️❤️❤️ pic.twitter.com/3DzIaMueIh 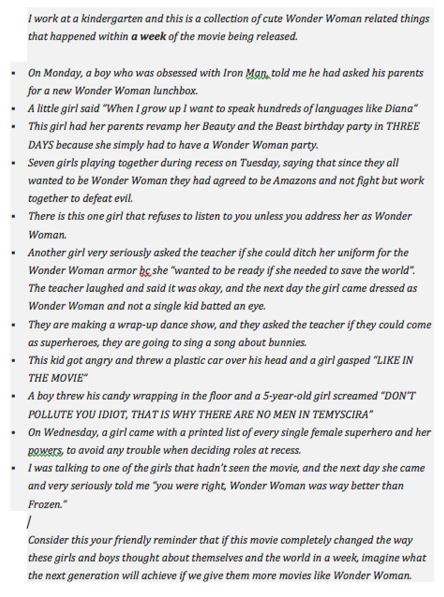 Each of the 11 points the teacher spelled out took place within just one week of the movie’s release! And it’s not just little girls who are gravitating towards the movie’s strong, female heroine; even her male students– including one little boy who “was obsessed with Iron Man”– admire Diana, the unconquerable princess of the Amazons.

The note describes her class’s obsession with the film, including one little girl’s decision to wear a Wonder Woman costume to school, as well as the lessons they’ve learned from it, including the time 7 girls all decided to work together at recess instead of fighting with one another, much like the Amazon warriors they’d seen on screen.

Diana herself, actress Gal Gadot, said the note gave her chills and is her inspiration!

Wow the last paragraph really gave me the chills.
So true. So powerful. Gives me a huge drive to dive in and work on the next one..?? https://t.co/mI4hYfbNkV

The teacher concluded her note with a hopeful plea:

Consider this your friendly reminder that, if this movie completely changed the way these girls and boys thought about themselves and the world in a week, imagine what the next generation will achieve if we give them more movies like Wonder Woman.