It isn’t often judges see their courtrooms filled with cheering 5-year-olds. Then again, few hearings are as uplifting as the one that took place in the Kent County courtroom.

On December 5, Michigan parents David Eaton and Andrea Melvin appeared before Judge Patricia Gardner. Their 5-year-old foster son, Michael Clark Jr., was there as well, looking quite dapper and adorable. The day called for a celebration, as it marked an exciting new chapter in their lives. 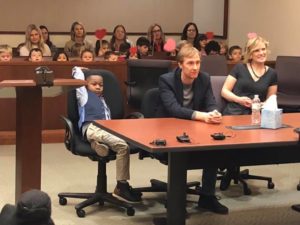 From the moment David and Andrea met Michael last Thanksgiving, they loved him as their own. That bond has only grown stronger in the year they’ve spent with the little boy. Both realized early on they couldn’t live without him.

So, on the county’s Annual Adoption Day, they made Michael a permanent member of their family. He was one of 36 children adopted during the event. And the beautiful moment was made even more special by all the tiny supporters who came to share it with him. 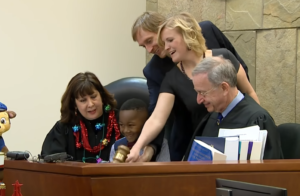 Before the adoption, Michael’s teacher, Kerry McKee, made a suggestion to his mom. Michael has said before that his fellow kindergartners at Wealthy Elementary School are like family. So why not include them in the celebration? Andrea and David loved the idea — as did Michael. It was settled; the children would take a field trip to the courthouse. 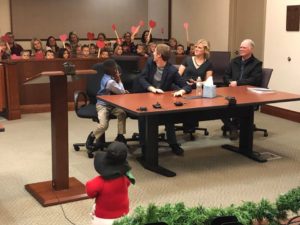 The entire kindergarten class clapped, cheered, and waved red paper hearts on sticks as the adoption was finalized. Then, they told the judge how much Michael meant to them.

“I love Michael,” one declared. Another added, “Michael’s my best friend.” 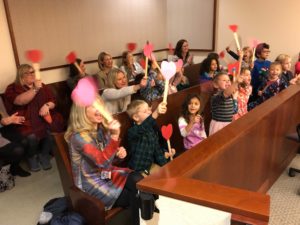 Surrounded by so much love, Michael couldn’t have been happier. Nor could Kerry be prouder of her students, who all taught a very important lesson.

“The lesson is put a little love in your heart,” she said. “We rise when we support others.” 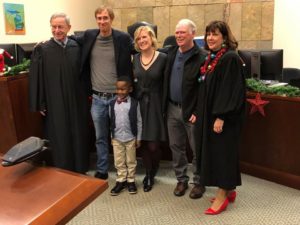 Family isn’t just defined by blood. It’s a fellowship forged by friendship, kindness, care, and support. That’s why Michael gained not one, but two families on adoption day. What a lucky (and loved) little boy.

Share this story to honor all the families brought together by love.

When you consider Agnes Keleti's zest for life and remarkable physical health, it's hard to believe she just turned 100 years old. Born on January 9, 1921 in Budapest, Hungary,...