There are plenty of talented young athletes — and then there’s Karolina Ramirez.

At just 12 years old, this basketball player is a legend online and in her hometown of Stuart, Florida. But her ability to sink tricky shots only covers a fraction of what she can do! 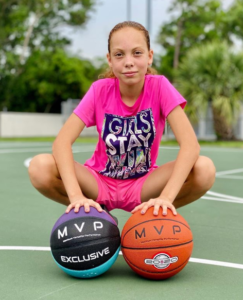 Not only has Karolina been playing the sport for most of her life, but she also has a gift for nailing seemingly impossible stunts!

“It become apparent that Karolina was a talented player at 6 years old after playing and practicing basketball since she was 4,” said Orlando Ramirez, her dad. “She performs the trick shots by practicing for hours and challenging herself.”

It’s not hard to understand why people are calling her a child prodigy when you see her in action! In one mind-boggling video, the girl dribbles and passes two balls through a hula hoop — all while jumping on a pogo stick! 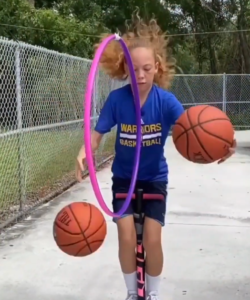 Then, without falling or tripping once, she gets on the ground and dribbles both basketballs between her legs. She makes it all look so easy!

Her skills have earned her thousands of fans on Instagram, where she shares videos of herself pulling off more epic stunts and playing against other kids. There’s no question that she has a bright future ahead of her!

“It helps her get closer to achieving her goals,” Orlando added. “Basketball is simply a platform that will open many paths in her life.” 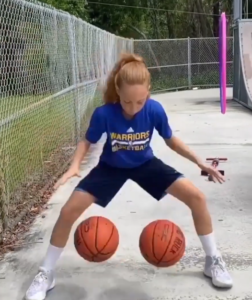 Talk about gifted! If she’s this good at 12, just imagine how incredible she’ll be as an adult! Watch out, WNBA! Karolina is coming for you! Even if she chooses another path in the future, her hard work and determination will ensure her success no matter what. Keep it up!

Check out her insane skills in the video below, and share this story to amaze your friends.