For over 100 years, there has been an on and off again war between Israel and Palestine, over who should have rightful ownership of the land. Both nations have claims on the land that go back thousands of years and even the capital city of Jerusalem has been divided in terms of ownership.

Because of this unique conflict, many Palestinians and Jews find themselves living among each other in close proximity causing the tensions to consistently be high.

However, one nurse in Jerusalem has proven that all mothers need to stand together, regardless of their nationality. 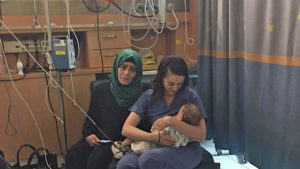 On June 2nd, nine-month-old baby Yaman was driving with his Palestinian mother and father, when their car collided head on with an armored truck in Jerusalem. Yaman’s father was killed on the spot while his mother sustained a serious head injury.

They were rushed to the Hadassah Ein Kerem Hospital where Yaman’s mother is now in serious condition. Yaman himself also had light injuries but the more serious issue for Yaman was that he did not want to drink out of a bottle. 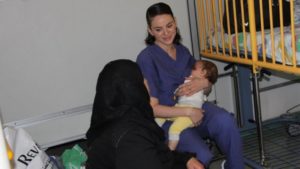 The Times of Israel

When Jewish nurse Ula Ostrowski-Zak started her shift, baby Yaman had been crying of hunger in the emergency room for over 7 hours. No one had been able to get him to take a bottle.

Yaman’s aunts asked Nurse Ula if she could help find someone to breastfeed Yaman. But since she was still a breastfeeding mother, the solution was obvious.

Throughout her shift that night she nursed him five times. She told Ynetnews that “his aunts embraced me and thanked me. They were really surprised and told me that no Jewish women would agree to nurse a Palestinian baby they did not know.” 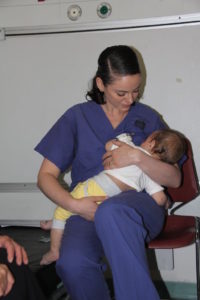 The Times of Israel

This selfless nurse also helped to find more volunteers who could breastfeed Yaman after her shift ended.

When Ula posted the plea for help to the Facebook group La Leche League, she received more than a thousand responses from women all over the map offering to make sure Yaman was fed.

“His aunts were surprised that a Jew agreed to breastfeed him, but I told them that every mother would do it,” Ula told Ynetnews.

War may be raging and politics can get dirty, but this story is an amazing example of the uniting love that all mothers share.

Share this story with a friend who could use some inspiration!