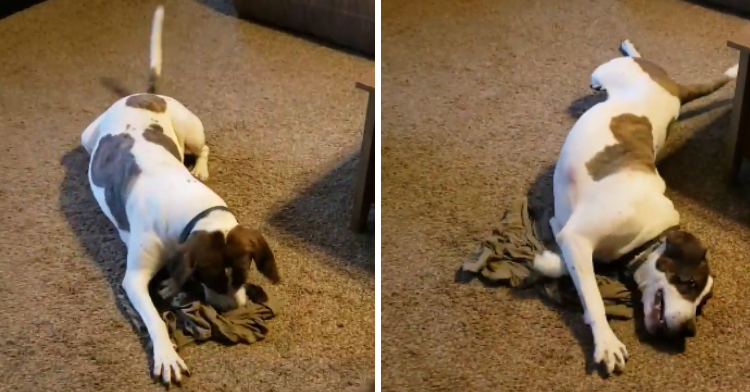 Brindle the dog had no home or family of his own a few years ago. But that was before he met JD Aument and his wife, Rachel.

Once a sad, lonely shelter dog, Brindle’s life turned around when the Pennsylvania couple brought him home for good. While he couldn’t be happier with either of his new owners, he bonded instantly with JD. Rachel says JD is his favorite, while she’s their other dog, Xander’s. 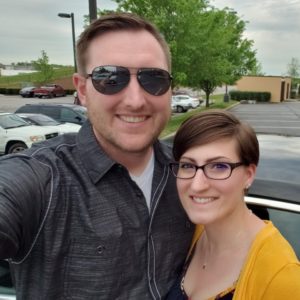 That’s why Brindle had an especially difficult time dealing with his dad’s deployment beginning in 2018. JD spent close to a year overseas serving as a firefighter in the Army Reserves. The whole family felt his absence, but for Brindle, it became unbearable. 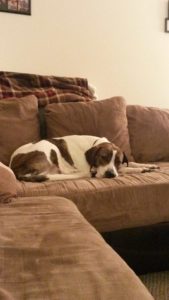 “He’s so sad without him here,” Rachel said back in March. At that point, JD had been gone for nine months. “He has days where he just sits at the front window, crying.”

JD couldn’t stand the thought of his best friend feeling abandoned. That’s when he came up with a brilliant idea. If he couldn’t be there physically for his buddy, he could give him the next best thing — his scent! 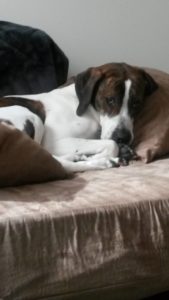 JD rooted through his clothes and picked out a special present to send his pup — a stinky, unwashed shirt. When Rachel received it in the mail and presented it to Brindle, he caught his dad’s scent immediately. 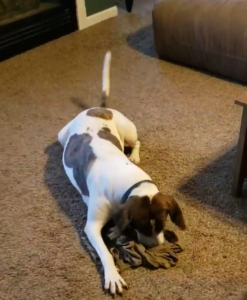 The somber, depressed attitude Rachel described disappeared as Brindle flopped onto the floor and rolled all over JD’s token of love, sniffing furiously as his tail beat the air.

“He immediately knew that it was JD’s shirt. There was no doubt about it,” Rachel said. “I was crying so hard while recording his reaction.” 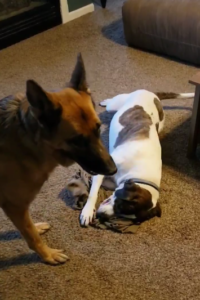 After Brindle spent the next day carrying the shirt everywhere with him and even sleeping with it, Rachel ended up dressing him in it to makes things easier. And, she says, he wasn’t the only one who found immense comfort and reassurance in the piece of clothing.

“I miss JD so much and it was the first time any of us had smelled him in almost 10 months,” she said. “I had to take a minute with the shirt for myself before I could share with Brindle.”

Fortunately, neither she or Brindle had to wait much longer for the real thing. JD came home about a month later in what we’re sure was a very joyous and tear-filled reunion. We weren’t surprised to hear Brindle hasn’t left his dad’s side since!

Share this sweet story to encourage other military families whose pets can relate!