Everybody gets starstruck when they meet their heroes, even people who are celebrities themselves!

On a recent episode of Carpool Karaoke, James Corden, host of The Late Late Show With James Corden, was driving around with singer Sam Smith doing the usual half-interview, half-sing-along routine of the popular show segment. Sam and James chatted away, talking about funny moments from Sam’s life, like the time he sneaked out to attend a Lady Gaga concert when he was a teenager.

After singing along to several of Sam’s biggest hits, he confessed a love for the girl pop group Fifth Harmony. “I’m obsessed with them” Sam said. “I’m a Harmonizer.”

Sam even started describing his elaborate plans for a future wedding, stating that he even plans to walk down the aisle to a Fifth Harmony song!

James and Sam start to sing the Fifth Harmony song “Work From Home” when suddenly, at around 13 minutes in, James stops the car and makes a phone call.

“Something doesn’t feel right,” he says with a worried expression.

Much to Sam’s surprise,  all four members of Fifth Harmony started climbing into the backseat behind him. He was so excited! He had to kiss each woman in turn and declare how much he loved them. They all then sang together and it was obvious they had a total blast! 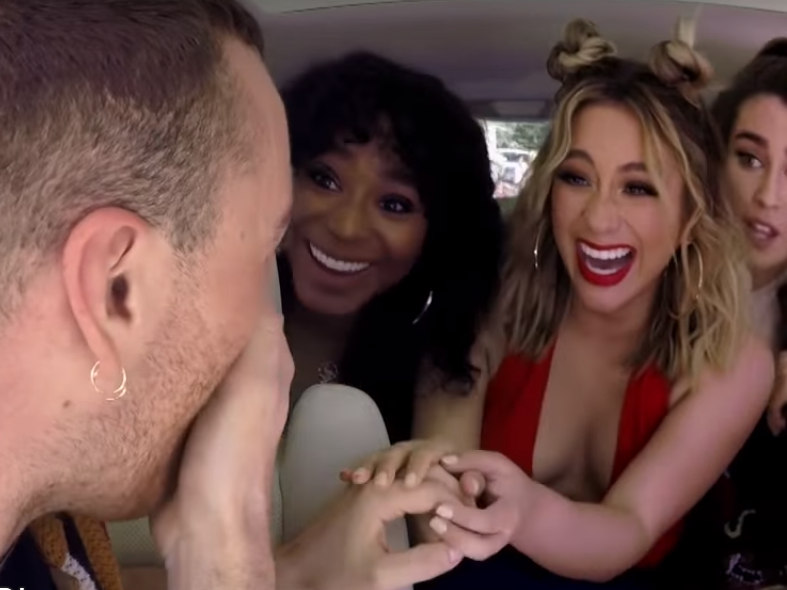 “This has just made my year,” Sam said when it was all over.

Watch the video below, and share with someone who would just cry if their favorite band surprised them like this!