But there is a touching aspect to their story that has slowly started to go viral.

You see, Angie went blind in 2014 due to complications from diabetes. So although Angie can hear the action, she, unfortunately, can’t see what Noah’s doing on the basketball court.

That’s where Gary comes in. 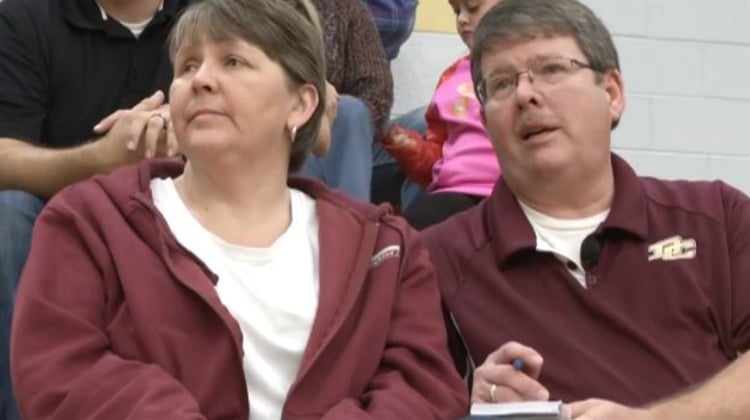 Gary was determined to help Angie continue to go to games and feel as involved in the action as possible. So at each Running Wolverine’s game, he gives her a play by play of the action. Because Angie and Gary regularly attend home and away games, it only took a short time for fellow parents and local sports fans to notice.

Carissa Web, a parent who also routinely attends basketball games, described it as “like listening to ESPN.”

“[Angie] asks questions, she yells, she is really tuned in. He is her eyes, and he doesn’t want her to miss out on her team.  He’s her very own personal sports announcer.”

Angie was also full of praise for Gary’s thoughtful efforts. She said, “I saw every game before I lost my sight, and I feel like I’ve seen every game since. Gary helps me watch the game.”

“He describes everything that is going on, and I just visualize it. In my own way I can really see what the boys are doing.”

Not only has Gary gone above and beyond in keeping Angie up to date with the latest sports action, he’s also completely accommodated their home after she went blind.

This touching story shows that there are people out there who through their words and actions show they truly understand the meaning of the vow “in sickness and in health.”

Learn more about Gary and Angie in the video below — and don’t forget to share this story!