It’s easy to humanize our pets, not only because they’re bona fide members of the family, but also because they so often show compassion and mirror our personalities – and facial expressions.

You can tell when a dog’s doing his or her own version of a smile just by the way their face is set. Mouth open just a bit with the sides showing? That’s definitely a happy dog. It’s harder to tell with other animals, but this little horse below is most definitely in a happy place: 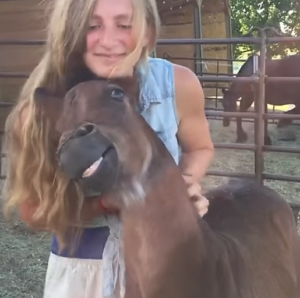 The video was taken at the Chevalia Estancia’s Mares breeding facility in Huntsville, Utah. Alexandra, whose family owns the facility, was doing some bonding with a two-week-old horse by giving him a good rub along his mane, prompting the most ridiculously adorable smile! 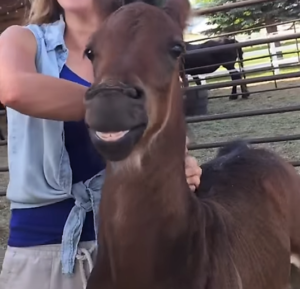 Along with this video, the stable provided some background about the heart-melting moment.

The horse’s name is Asterion. He’s a special horse to Alexandra because he is the grandson of Stary, the horse who was by her side as she raised her own children and helped her navigate through some tough tough hurdles in life.

When Stary passed away, the family was so wrapped up in their own grief that they forgot Stary’s loss wasn’t only theirs to mourn. They discovered her daughter, Echappe, grieving in her own way, laying in the exact same spot where her mother had passed away. 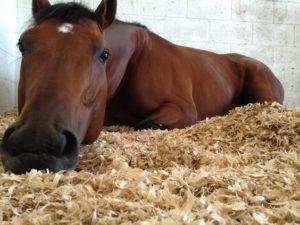 Eventually, Echappe had a foal of her own, Asterion, who inherited “all the beauty of his Arabian grandmother, with her head, beautiful flaming color.”

So they gave him her name.

We truly wanted to honor the Grand Mother Mare, Stary by bestowing upon this lil guy, her name. Asterion, is an Ancient Greek word that means “ Stary”. Stary is still with us and flows through this amazing soul. 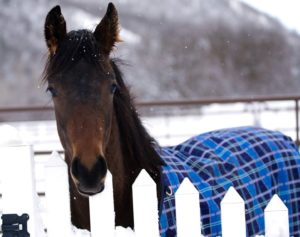 [We felt Stary] very close the night my daughters and I midwifed him into this world, and the ensuing days. It seemed he immediately knew us from the start.

But when he began to smile, we were so amazed that he would show such a human expression! In the video we are laughing but also weeping as here was this beautiful gift from heaven showing us that again, horses are sentient beings and have feelings; they mourn, the love, they laugh and they smile.

On its surface, the video below simply shows the adorable moment of a horse showing a human expression, which in itself is enough to make us laugh. But knowing the backstory behind the smile? That brings it to a whole new level.

Watch Asterion flash his pearly whites in the video below, and remember to share with another horse lover today!