The spirited young man was born with ectrodactyly ectodermal dysplasia-cleft syndrome, an extremely rare disorder that left him with cleft lip and palette, cleft hands, cleft feet, without teeth and with urinary and GI problems. Despite his extreme condition, Ethan’s spirit refuses to be anything less than joyful.

After his birth, neither parent was found to be a carrier of the gene, meaning it was a random genetic mutation when Ethan was conceived. The disorder will not affect Ethan’s lifespan – but will require adjustments unique to his condition. 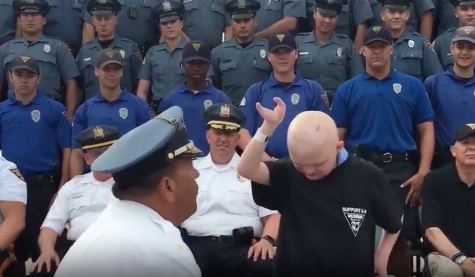 “He can do just about anything other kids his age can, he just does them a little differently,” his mother says.

Ethan has had the chance to do some awesome things in his 9 years on earth – in fact, one of his lifelong dreams just came true!

Over the weekend, Ethan was sworn in to the Wildwood NJ police department as an honorary deputy. The entire department came out for the ceremony, and Ethan was so excited, he could hardly speak. 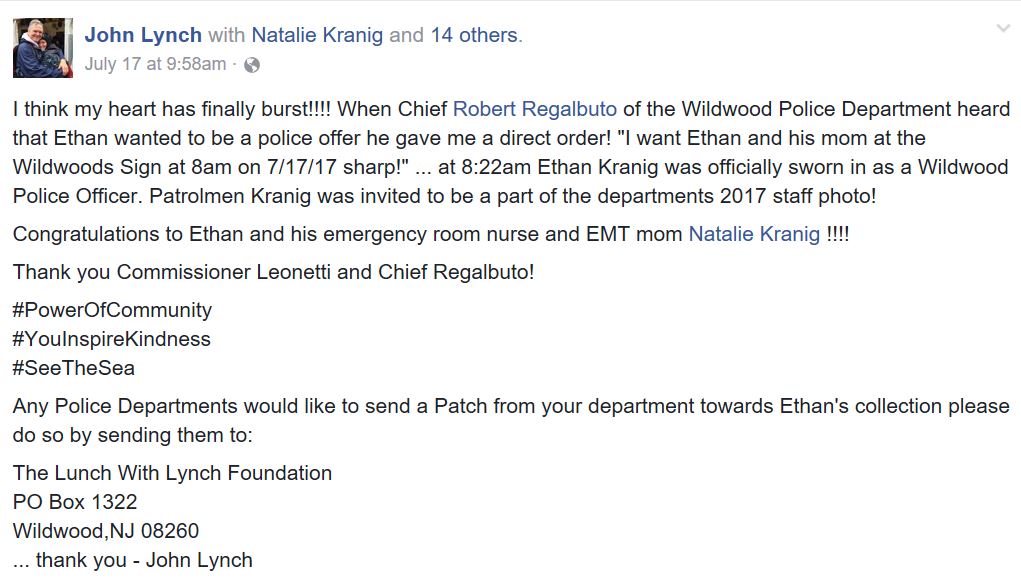 How touching is it that an entire police force put their schedules on hold to honor this young boy? It’s clear from the big hug Ethan gives in the video below– this meant the world to him.

Check out the swearing-in ceremony in the video below, and share to spread smiles today!

I think my heart has finally burst!!!! When Chief Robert Regalbuto of the Wildwood Police Department heard that Ethan wanted to be a police offer he gave me a direct order! "I want Ethan and his mom at the Wildwoods Sign at 8am on 7/17/17 sharp!" … at 8:22am Ethan Kranig was officially sworn in as a Wildwood Police Officer. Patrolmen Kranig was invited to be a part of the departments 2017 staff photo! Congratulations to Ethan and his emergency room nurse and EMT mom Natalie Kranig !!!! Thank you Commissioner Leonetti and Chief Regalbuto!#PowerOfCommunity#YouInspireKindness #SeeTheSeaAny Police Departments would like to send a Patch from your department towards Ethan's collection please do so by sending them to:The Lunch With Lynch FoundationPO Box 1322 Wildwood,NJ 08260 … thank you – John Lynch