The sweet face tugged at Erin Gillott’s heartstrings from the moment she first saw it.

She was driving to work in Maineville, Ohio, recently when she spotted a puppy sitting on the side of the road. The poor thing looked like she hadn’t eaten in days. Erin immediately pulled over, but the pit bull refused to let her get closer and eventually ran off. While Erin had to move on with her day, she couldn’t get the dog out of her mind and called the local warden for help.

After work, she drove past the same spot and saw the warden standing there. She stopped to talk to him, but he said he would take care of it. Still, Erin couldn’t let the pup go, so she returned an hour later to search.

Amazingly, she found the pup sitting there!

The dog was still just as afraid and ran back into the wooded area off the road. Only this time, Erin refused to leave! She grabbed a bag of croutons from her car, sat down, and waited for the little one to approach. Two hours later, the puppy finally came out and allowed Erin to pick her up and take her home. 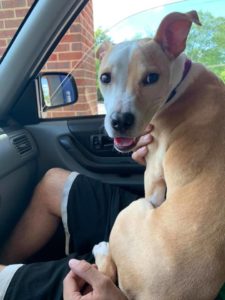 By then, Erin was completely smitten with the little dog she named Lily! 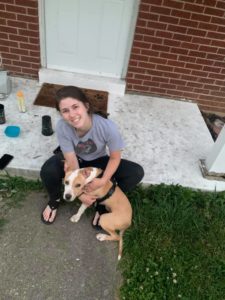 It wasn’t long before her boyfriend, Zakk Huffman, felt the same way! 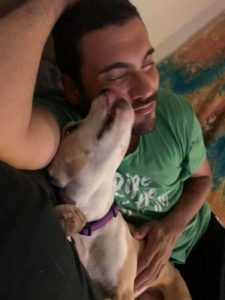 The two of them made the earliest appointment with a veterinarian they could and found no microchip. In the meantime, they showered Lily with hugs, kisses, and plenty of food and water.

“We think she was dumped because she stayed in the same area by the road for an entire day instead of traveling around,” Erin wrote on Facebook. “But all that is behind her now, and we can’t wait to watch her get healthy!”

They may only be able to guess what Lily has been through, but they know for sure that the pup feels safe and happy with them!

“I pulled 17 ticks off of her, she’s very emaciated, and has a big cut on her paw, but she’s home with us and loving it!” Erin added. “I’ve never cried so many tears of joy. She’s so appreciative and I can feel it every moment I’m with her.” 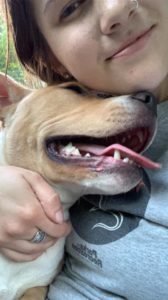 We’re so happy Erin was in the right place at the right time! Now this good girl can put her past behind her and enjoy life to the fullest with her new forever family.

Share this sweet rescue story with other dog parents to make them smile.