Law enforcement officers face danger every day for one reason – to keep the rest of us safe. The media has largely ignored this truth to focus on a few negative stories, but here’s one we hope will remind us all of their sacrifice to serve and protect.

A police officer, who wanted to remain anonymous, had to deal with a drunk homeless man at a graduation ceremony recently. But the way he handled a difficult situation made all the difference. And is incredibly inspiring.

Check out his story below.

“You may be asking what community policing is all about. Sometimes it means finding alternatives to handling issues with people that have mental illness or substance abuse problems. Today I ran into a man that I have dealt with for the last 10 years.

He is a fixture here downtown and often seen “unofficially” directing traffic and trying to solve community issues. He does this mostly by yelling and stumbling around. He happened to come over and get involved in a graduation ceremony today in a highly intoxicated state.

It was looking like he may have to be taken to jail if he could not be convinced to stop disrupting the service and trying to take all the food.

I saw what was happening and throughout my years of dealing with him knew exactly what to do.

He used to be a United States Marine so he gets my respect automatically.

I simply walked over to him, saluted him and asked if he would sing a cadence as we walked away from the event.

He was super excited and sang and walked with me. I led him away while at the same time maintaining his dignity.

They teach most cops to stand a certain way and keep our distance.

There are some situations this isn’t needed.

He asked me for a hug. 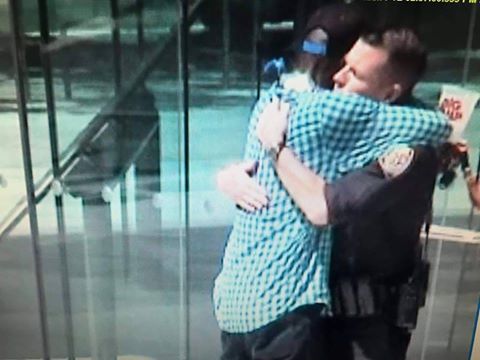 Sure, he smelled like a distillery and kind of spits when he talks. But the man is a human being and all he wanted was a hug.

Did I oblige him?

You bet I did.

We hugged for about 10 seconds.

And it was a full hug, not a side-hug with a back pat.

Sometimes all it takes to hear somebody and make them feel human is to be human too.

This won’t be on the news or make any “cop watch” websites because at that very moment, we were just two men sharing an embrace.

I wish him well until next time I see him.”

Share and spread some perspective! Every person deserves respect.