You never know what you’re going to encounter when you hit the open road.

Jim Raynor was traveling along a freeway in Jacksonville, Florida, one day when he witnessed something that had his heart pounding. A pick-up truck in front of him had turned on his flashers to indicate some kind of hazard up ahead. It wasn’t until the truck moved over that Jim realized he and the other drivers were in a potentially dangerous situation. If he didn’t do something, someone might get injured — or worse. 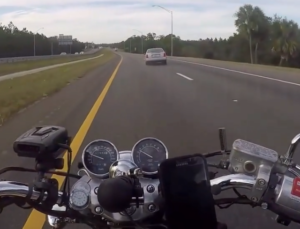 In the video, a car can be seen with at least one tire already blown and the front panel nearly caved in, driving erratically. After a few tense moments, the car drifts into the slow lane, then off the road completely and into the grassy area off the shoulder. And it keeps going. 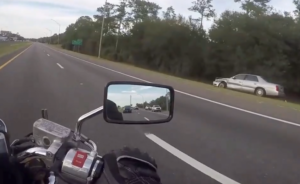 Jim’s helmet cam captures the entire sequence of events, which continues with the mystery driver nearly driving into a ditch before self-correcting and continuing forward. Then, the car completely takes out a light pole.

Something is seriously wrong.

At this point, it’s pretty obvious the driver is in the middle of some kind of medical emergency, so Jim pulls ahead of the car and frantically motions for him to pull over. 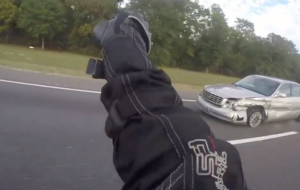 But the motorist obviously can’t hear him and continues along, sideswiping a concrete barrier and a couple guardrails.

While all this is going on, Jim and other drivers create an improvised roadblock to keep everyone out of harm’s way. By this time, they’ve already gone a couple miles, but the car finally veers off into another grassy area and stops (because it’s stuck). Jim rushes over and pulls the door open, only to find the airbags deployed and driver in an almost catatonic state, his foot still on the pedal. 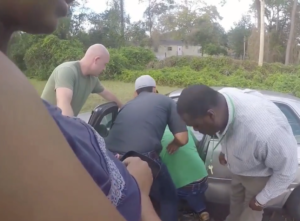 He’s soon joined by half a dozen other Good Samaritans, one of whom happens to be a nurse and tests the driver’s sugar levels to see if he might be having a diabetic emergency. As it turns out, he’d had a stroke. Emergency responders transported him to a hospital for further care and days after the incident, he appeared to be on the road to recovery. 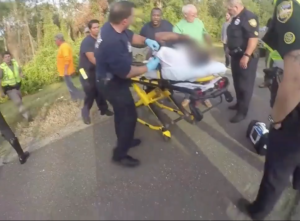 It’s absolutely miraculous that no one was hurt while these events unfolded. The driver himself didn’t even have a scratch on him! This is evidence of what we can accomplish when we pull together for the greater good of everyone around us.

Watch the shocking footage down below, and share to spread thanks for these and all the other Good Samaritans out there.