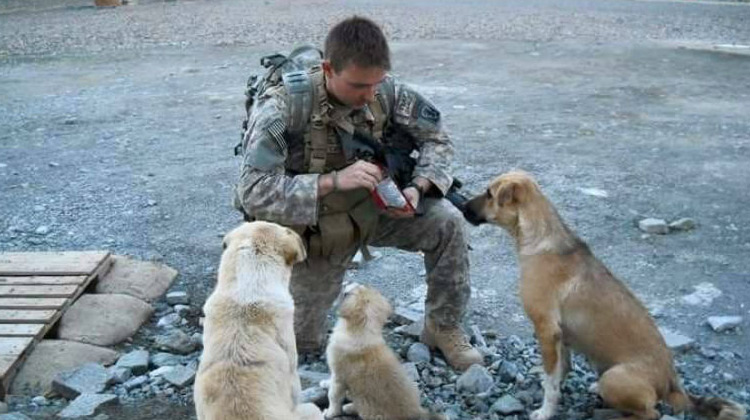 A Suicide Bomber Attacked This Soldier’s Base, But Wha...

Soldiers put themselves in harms way every day to keep us safe. But who keeps them safe? For Sgt. Chris Duke, three unlikely heroes took on that role.

Duke was serving in Afghanistan when a suicide bomber tried to attack his base, but three strays dogs – Rufus, Target and Sasha – came to the rescue. He and his fellow National Guardsmen woke up to the canines barking furiously – that’s when they knew something was wrong.

The three dogs were actually blocking the bomber from the camp’s entrance by taking a protective stance and biting his leg. The man was taken aback and forced detonated the bomb before he could get in.

Remarkably, all 50 soldiers survived that night. But the bomb was fatal for Sasha, the youngest of the dogs.

When Duke’s deployment ended one month later, he was distraught leaving the pups behind. That’s when he reached out to Hope for the Warriors, determined to bring the two surviving dogs back. His plea was met with an incredible $21,000 in donations, enough to bring Target and Rufus back to the states.

Watch this incredible story of sacrifice and friendship below.