You know those moments when you’re having such a great time that you never want the fun to end? Well, we’ve got the perfect solution for you, courtesy of one hilarious dog.

Meet Ryder, a Labrador and basset hound mix who isn’t shy about communicating what he wants. He’s also not afraid to make a scene, especially when his dad Sean Tornetta doesn’t give in to his demands. 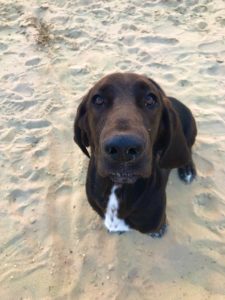 See, Ryder adores taking walks, and when we say that, we really mean it. We know for a fact just how much he loves nice strolls with his family because when it’s time to stop, he puts up a fight. 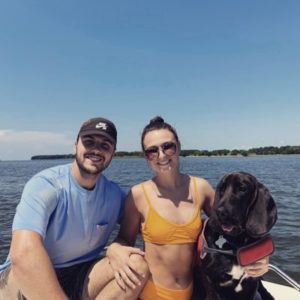 Nowadays every walk ends in a dramatic power struggle between Sean and Ryder. As they start getting close to home, Ryder will halt suddenly, his leash going taut. Then, like the diva he is, he flops onto the ground and refuses to budge.

Sean has taken many giggle-worthy videos of his dog’s over-the-top protests, which usually end with Sean picking Ryder up and carrying him home. But Sean is never fooled. He knows Ryder’s antics are all for show. 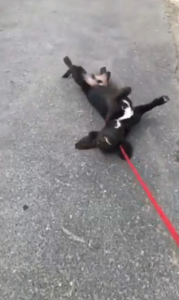 “He pretends like he is exhausted, but every time he drops, he is a block or so from our house,” Sean told the Dodo. “He is in shape and can certainly make it. We’ve seen him spring and play for hours at the dog park, so we know it’s all an act.” 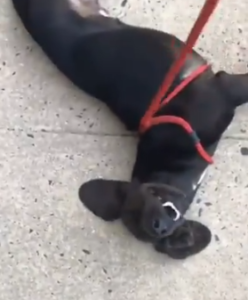 Still, Sean can’t deny that he enjoys Ryder’s nonsense. As it turns out, so do millions of other people. Sean uploaded a compilation video of Ryder’s collapses to Twitter, and everyone is loving it. That said, he’s hoping to break Ryder’s bad habit soon.

Perhaps unsurprisingly, food is a reliable motivator. “The second I start to wiggle my pocket with treats, he springs right back up like nothing happened,” Sean said. “It’s quite hilarious how sneaky he thinks he is.” 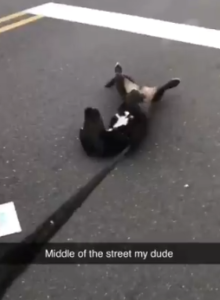 We can totally understand Sean’s struggles. Honestly, who could say no to that adorable face? Ryder certainly knows how to use it to get what he wants.

Watch as Ryder makes his feelings crystal clear in the video below, and share to give other dog owners a laugh.

This is how my dog protests coming home from a walk. This happens every time pic.twitter.com/a6el7A92Xq