A story about a man in Detroit who has been commuting 21 miles to work on foot has recently inspired thousands across the country to donate over $221,000. James Robertson, 56, hasn’t missed a day of work despite having no direct transportation to his job in Rochester Hills outside of Detroit, MI since his car broke down some ten years ago.

He rides the bus system as far as he can, but that still leaves him with 8 miles of walking on his way to work, and 13 miles on foot in return–rain, snow or shine!

Robertson first caught the attention of banker Blake Pollock, who noticed Robertson trudging through the snow while he made his own commute to work. The two became fast friends as Pollock began offering rides to Robertson.

Robertson’s story eventually went viral online when the Detroit Free Press created a video detailing his story.  The video caught the attention of 19-year-old Evan Leedy, a student at Wayne State University, who was inspired to act when he saw hundreds of people asking how they could help. Leedy set up a GoFundMe campaign on his phone, and within the hour had raised $2,000. 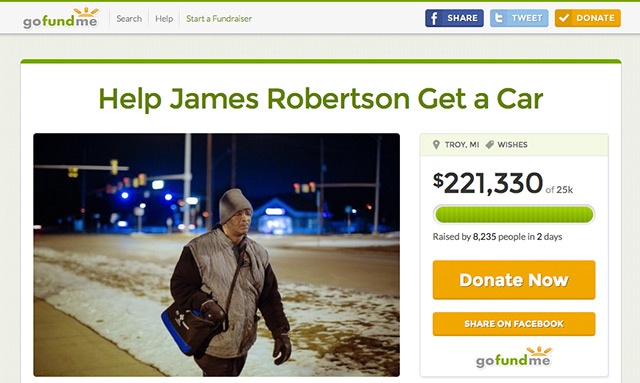 The campaign as of today has raised over $221,000 from nearly 8,500 individual donors! That number will only continue to rise as the story continues to spread throughout social media and news channels.