They were making the cross-country trip without adult supervision. They only had a few small bags between them. Neither had identification. But what really raised the ticket agent’s suspicions was that their first-class tickets were multi-leg, one-way only, and they’d been purchased with a stolen credit card.

They kept looking back and forth at each other like they really weren’t sure, and then they were texting someone on the phone, and that person was giving them answers.

Thankfully, she listened to her gut and refused to allow them to board the flight from Sacramento to New York that day in late August.

When airport security arrived, the two teenagers, a 15-year-old and 17-year-old, explained someone they met on Instagram, “Drey,” bought their tickets for them and promised to pay them $2,000 to model and appear in music videos for the weekend.

Between the two of them, they had a bunch of small bags. It seemed to me as if they were running away from home. They kept looking at each other in a way that seemed fearful and anxious. I had a gut feeling that something just wasn’t right.”

It turns out Denice was right. Neither of the girls’ parents were aware of the arrangement. And the girls weren’t even aware that the tickets were only one-way.

Deputy Todd Sanderson was certain they were in serious danger.

“When I told them that they didn’t have a flight home, that’s when it kind of sunk in that maybe I was actually telling the truth.

In my opinion, what was going to happen was they were going to go back to New York and become victims of sex trafficking. They said they wouldn’t have let that happen, and I said they probably wouldn’t have had a choice.

Officials immediately attempted to track down information about “Drey,” but his Instagram profile had already been deleted. The girl’s had his phone number but multiple attempts to call him back resulted in nothing. Deputies even tried to trace his accounts to no avail.

The man called Drey, had disappeared. 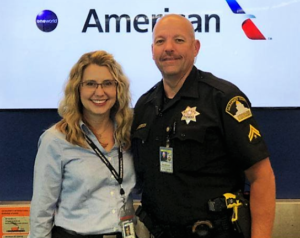 The incident actually happened last summer, over six months ago, and thanks to Denice, this time the girls were safely reunited with their parents. The airline is sharing it now to raise awareness about the danger of human trafficking in hopes that it will remind adults to remain vigilant.

Customer service agents like Denice play a critical role in helping to thwart human trafficking efforts and save lives, the airline said in a statement, calling Denice “a true professional with a huge heart.”

A huge round of applause to Denice for everything she did to keep these girls safe. Remember to share to spread even more awareness.