Deb Wailes still can’t figure out how she managed to survive the tornado that ripped through her Beavercreek, Ohio apartment in May. But the grandmother is grateful, nonetheless.

“I don’t even know how I lived through that,” Deb said. “It’s just a miracle that I’m alive.”

Her apartment didn’t fair as well. The roof was destroyed, and part of a wall caved in, pinning the 65-year-old until neighbors freed her. She had broken a leg and an ankle. While Deb was recovering in the hospital, she found out she had lost everything — including her most treasured possession. 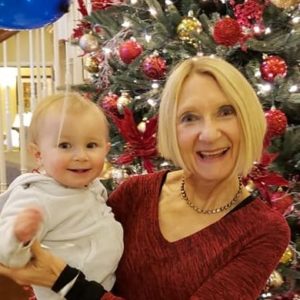 Deb had spent two years working on a handmade quilt that went missing among the debris left in the tornado’s wake. If she could get anything back, she wanted it to be that quilt along with portraits of both of her grandmothers. Those items mean a lot to her. So she decided it was worth a shot to spread the word on Facebook, where it caught the perfect person’s eye. 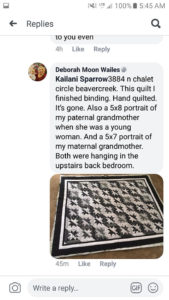 Columbus resident, Kyle Bickel, had already been driving around affected areas handing out water and food, so when he saw Deb’s post, he and his crew headed straight toward what remained of her apartment. 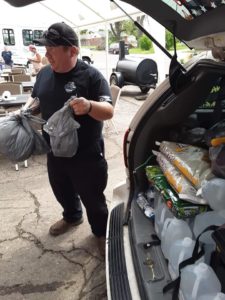 “I went on top of the house and looked inside the walls. I moved one of the walls, and we ended up going through each bedroom, couldn’t find nothing,” Kyle said. He was risking his safety, but if he could find something, it would be worth it to him. 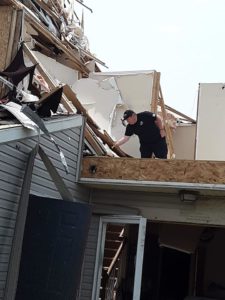 Kyle figured the missing items might have been blown outside, so he checked the surrounding area. While he didn’t find the portraits, he did notice something else under a two-by-four about a mile away — Deb’s quilt! 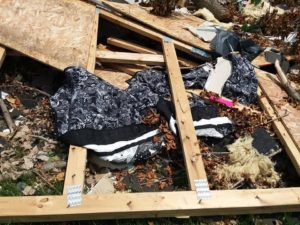 Kyle couldn’t wait to return the quilt to its rightful owner. He was beyond excited at being able to lift Deb’s spirits after everything she’d been through.

“It was very heartwarming, and it felt like we accomplished something more than just bringing food here,” Kyle said. 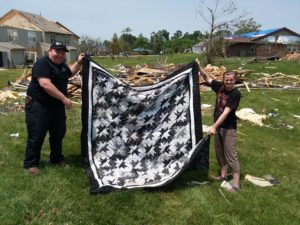 When Kyle and his friend, Leona Saylor, showed up at the hospital carrying the quilt, Deb broke down. To have just one small comfort back was overwhelming — as was the kindness from complete strangers.

“When those two people brought my quilt to the hospital, and I wheeled myself into where they were, I just saw that quilt and started crying. I was, like, ‘Oh my word. This is a miracle,'” Deb said. 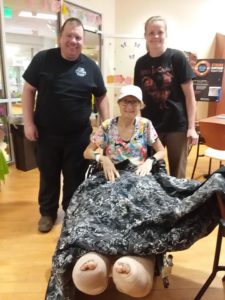 Deb is still recovering and hopes to be released from the hospital soon. She’ll be staying with family and getting around in a wheelchair for a few months. In the meantime, her daughter, Bethany, has created a GoFundMe campaign to help with medical expenses and to give Deb a fresh start. If you’d like, you can help by donating here. She may have lost nearly everything, but thanks to Kyle, she didn’t lose her smile.

Learn more about this sweet man’s act of kindness in the video below, and share to brighten others’ days!