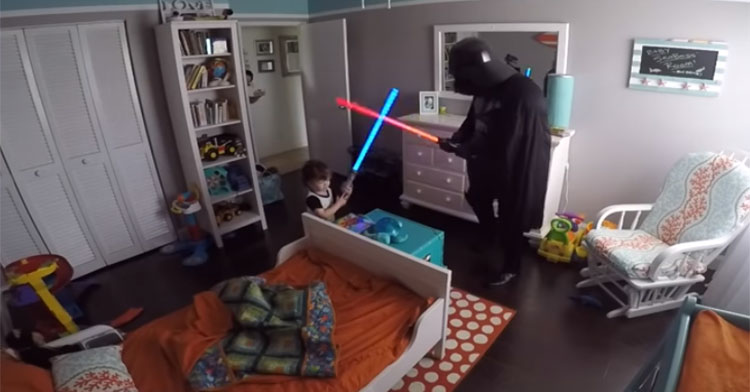 Dad Dresses Up As Darth Vader To Wake Son Up And Boy’s Res...

Dads are the greatest, but they have an obnoxiously funny way of trying to (and often succeeding at) pressing all their kids’ buttons.

Whether they’re eliciting eye-rolls with their infamous dad jokes or sneaking up for a surprise tickle attack filled with tiny shrieks, they love getting a response out of their little ones. And Rob Lopez is no exception.

Rob runs a YouTube channel called The Rebel Rave, which covers everything “Star Wars.” So right before May 4th rolled around a few years back, he decided to pull a little prank on his then 2-year-old son, Sebastian, with his wife’s permission, of course.

“My son Sebastian is a huge Star Wars fan and he loves Darth Vader,” Rob wrote. “Thought it would be fun to see what happened if Vader woke him up in the morning.”

We know what you’re thinking: bad idea, right? The kid will be terrified! Well, we’d probably agree… if not for Sebastian’s adorable reaction. It definitely wasn’t what Rob expected when he got all suited up, helmet, voice changer, and all, and sneaked into the sleeping toddler’s room. 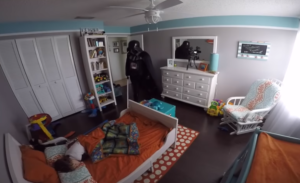 It took a bit more effort than Rob expected when it came to waking his son up. Despite the dad’s gentle prodding with his lightsaber, Sebastian remained curled up under his comforter, peacefully sleeping. 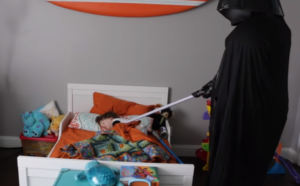 It wasn’t until Rob said, “Sebastian, wake up,” in that deep Vader voice that the kid finally opened his eyes and stared for a moment, confused. 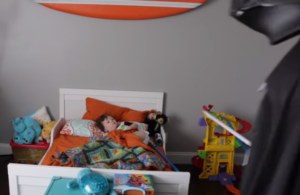 But as Rob later said, Sebastian is much more fearless than his dad gives him credit for. Oh, and he also came prepared. 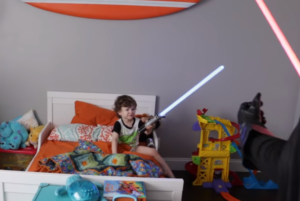 In a move his dad never anticipated, the little boy whipped out another lightsaber he’d been sleeping next to, ready for a fight. 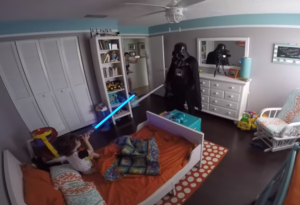 Well, he was ready for something, but it wasn’t defending the galaxy in an epic lightsaber battle. While Rob attempted to egg his son on, the little guy was interested in something much more important… 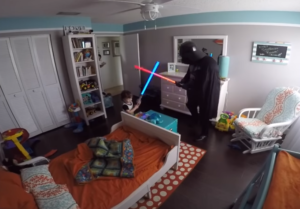 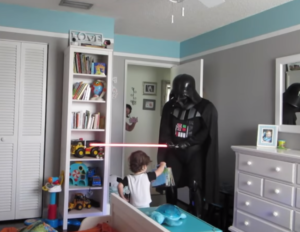 Accepting defeat, Darth Vader settled down into a rocking chair as Sebastian’s mom giggled and recorded just outside the door. 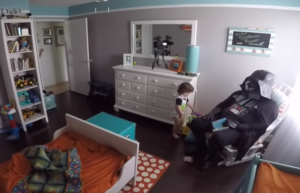 That may have been the most anticlimactic ending ever, but it sure was cute! Sebastian will love watching the video as he gets older and remembers the time he foiled his dad’s “evil” plans.

Watch as Sebastian takes on Darth Vader Dad below, and share with other Star Wars fans to give them a laugh.