Shaun Cunningham leapt into dad-mode at the Braves-Pirates game over the weekend when a rogue baseball bat came rocketing towards his son Landon’s face. 8-year-old Landon was excited to watch his favorite team play and was snapping pictures when the errant bat flew towards the stands.

“The bat came flying at me, my dad did this to block me,” Landon said as he threw his arm in front of his face. “It was going so fast I didn’t even hear it.”

The duo was sitting three rows behind the Braves dugout. When the baseball bat slipped out of a player’s hand, he had only seconds to spare.

“I was watching the game and I saw the bat flying,” Shaun Cunningham said. “It just slipped out of Danny Ortiz’s hand. And I saw it heading towards him [Landon]. I didn’t have a lot of time. Guess I’d call it Dad-mode. Just protecting my son.” 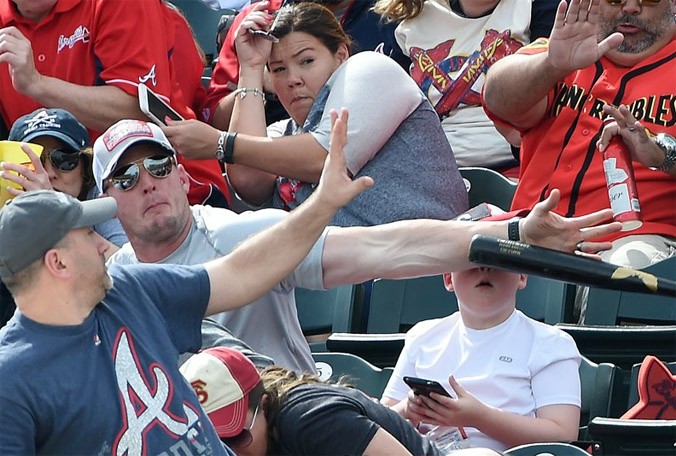 His split second move has since gone viral. The bat was heading straight for Landon’s face, but Shaun’s arm blocked it.

But what is most stunning: Notice how other spectators are jumping out of the projectile’s way while Landon’s dad is moving towards it.  It’s a stunning picture of what fatherhood is about.  And the beautiful moment of fatherly protection has been warming hearts all over the internet.

Landon will have more than a baseball game to brag about to his friends for a while yet.