Stefan Xidas is a 30-year-old man with Down syndrome and a student at the University of Illinois at Urbana-Champaign. He’s also a big fan of his hometown team, the Cubs, and it’s always been his dream to sing the National Anthem at a game.

…Even better would be to sing at the world-famous Wrigley Field. 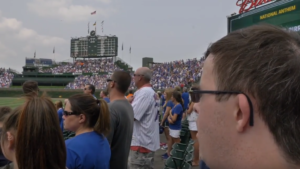 Last month, Stefan launched a GoFundMe to raise money for Special Olympics Chicago, saying he appreciates everything the organization does for individuals such as himself, and setting a goal of $5,000. But his fundraiser came with a wager for Cubs chairman Tom Ricketts.

If I hit my goal of $5,000, you’ll do your best to make my dream of singing the national anthem at one of your games. I appreciate your time. Go Cubs!

To be fair, Tom should let him sing the national anthem more than once, because Stefan’s fundraiser has now gone viral. Now he’s well on his way to quadrupling his initial $5,000 goal!

Tom Ricketts saw Stefan’s bet and is going far beyond just fulfilling his end of the deal. Cubs Charities, the non-profit associated with the team, will match however much Stefan’s able to raise, and that’s in addition to the $100,000 the organization already donated to Special Olympics Chicago earlier this year. And, of course, Stefan got to sing the National Anthem.

Way to go, Stefan! Check out the video below to see this deserving man’s dream come true, and share!

AWESOME! Stefan Xidas, a lifelong Cubs fan, sang the national anthem at Monday’s Cubs game. Xidas has Down syndrome and has been wanting to perform at Wrigley Field for years…http://via.wgntv.com/Cj2rp