We all know the feeling of panic when the traffic light turns green before we’ve made it across the crosswalk. Now imagine what it’s like when the light turns green, but you’re not even halfway through the intersection yet. And you literally can not run.

That’s the situation depicted in a video that was released earlier this month by a state-run television station in Sichuan Province, southcentral China. In it, an elderly man carefully plucks his way into a busy intersection, using two tall walking sticks for balance. 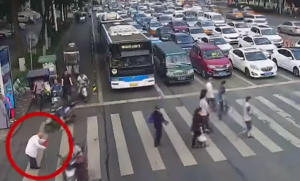 As he slowly shuffles forward, a cluster of other pedestrians moves ahead of him at a steady pace, quickly crossing the six lanes of traffic because they know that light’s about to change any second now. But he can barely walk, never mind sprint, and he barely makes it halfway across!

Four lanes of traffic have no choice but to stay put, but at the rate he’s going, it’ll take him forever to get across.

Fortunately, a compassionate police officer standing nearby knows this poor man has to be panicking so he rushes over. Then after exchanging a few words, the officer turns, squats down, then lifts the man onto his back and carries him the rest of the way!

He carried him piggy back the entire way! He moves all the way past the lines of moving cars to the man’s original destination.

Dashcam footage from a van in the intersection was later released, and shows exactly how terrifying this ordeal must have been for both men involved:

Thankfully, they both made it to safety. All thanks to a cop who cared enough about a stranger to put himself in harm’s way.

Watch this act of kindness unfold in the clip below, and share to spread thanks to this officer for coming to this gentleman’s aid.