One man’s encounter with the law served as an awesome reminder of our shared humanity and desire for harmony… especially in the face of violence and unrest.

Mike Powers was driving through Mississippi when he was pulled over by a police officer for speeding. Instead of driving off in a huff after the citation, Powers engaged Officer Olympia in conversation.

“As he started to walk away I asked him how he’s handling everything and how the cops are feeling in Mississippi with all of the senseless killings this week throughout the country. He said ‘things are tough, but we’re hanging in there and just trying to do the right thing and keep people safe…but it’s scary.”

Powers wanted to reassure Olympia that despite the senseless acts of violence targeting our law enforcement, people are still on his side.

“I told him ‘just so you know, a lot of people are standing with you all and respect the risks you take every day to keep us safe.”

Powers then handed Officer Olympia a token of his appreciation – a bracelet he makes for friends and family who need “extra protection.” 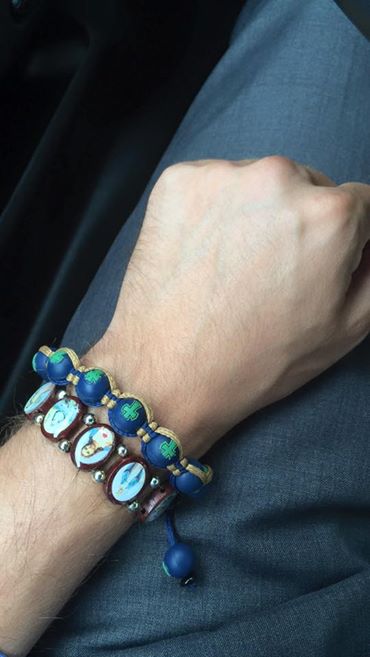 Olympia’s reaction to the gesture said it all.

“He took the bracelet, put it on, and his eyes started to tear up. I saw how much pain and stress this man and his family were probably under. I teared up too. As he walked away he said ‘this means more than you can imagine.'”

Powers later found that his speeding ticket had been voided, but he will never forget his experience on the side of a Mississippi highway.

“Two grown men, of different color, careers, upbringing, and journeys, who had never met before, sitting on the side of the road in Mississippi tearing up over how confusing and hate filled the world has become…shocked by random acts of kindness…realizing we aren’t alone in a world where evil tries to divide us every chance it gets.”

Hatred will always be around us, but every act of kindness will make its influence weaker by the moment.  How can you love others in a radical way?