Thomas C. Knox couldn’t believe who showed up to his subway station “dating booth” on this night.

It was a normal night. Thomas took the same 4 things to the subway station: a table, a coke bottle, a sunflower, and the game Connect Four. “Date while you wait” is what Thomas Knox calls his subway set up.

And it’s a brilliant way to remind us of a simply powerful truth: we are humans and we should connect. 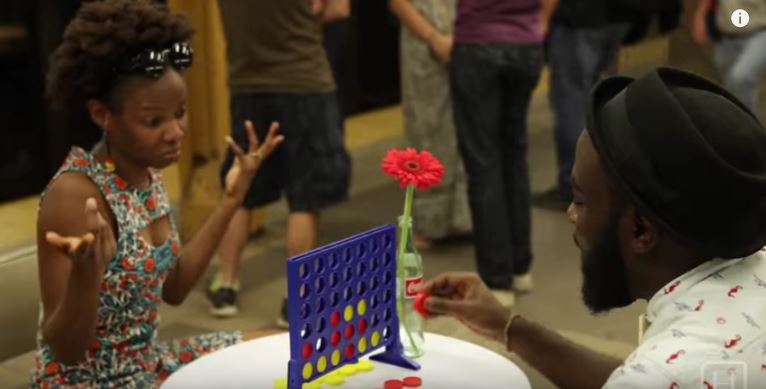 Once set up, Thomas sat at the table and invited people waiting for the subway to sit, talk and play him in Connect Four. His goal of the booth is not to find romantic love, though he is not opposed to love, but rather to connect with people by providing a place for human interaction amidst the hubbub of subway stations.

Knox enjoys each interaction, but on this night, Thomas’s favorite “date” showed up, Howard Wexler.

Howard Wexler, the inventor of Connect Four, heard about the mission of Knox’s “date while you wait” booth, and chose to show up and support the effort. Wexler has worked as a social worker, psychologist, and schoolteacher. Working since he was 11 years old, he worked his way through school, attending night school to earn his masters and later, his Ph.D.

Knox and Wexler both have an interest in connecting with people, innovating, and working with youth. They can thank their creative ideas, the game and the booth, for bringing them together. It is a meeting Knox won’t forget.

Thomas Knox has a dream of starting a non-profit that would connect minority youths with mentors, but until then he will mentor people in the subway, one date at a time.

Watch the video below and share it to inspire people to connect even when life gets busy.

15 Times Chaotic Kids Made Their Parents Question Their Life Choices

Being in charge of tiny humans is a full-time job, and you never know what to expect, no matter how much you try to prepare. Children are just too unpredictable,...

Soccer Star Gets Surprise Of A Lifetime When Mom Shows Up At Stadium After 3 Yrs Apart.

When you're part of a tight family, being apart can feel like you're missing a limb. Professional soccer player Juan Sanchez has gotten used to not seeing his loved ones...