Young kids have a profound knack for saying the most hilarious things. From their growing vocabulary to the tone of their speech, everything about their delivery makes it difficult not to burst out in laughter.

Meanwhile, babies who are still in their babbling baby talk stage can be impossible to interpret, and yet they are just as hilarious when you try to converse with them. 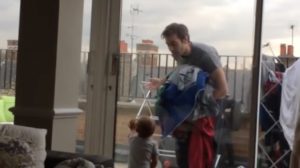 A video posted in 2014 shows a dad in a very serious debate with someone he definitely cannot reason well with– his little baby boy! While dad was outside taking care of the drying laundry, his son came up and began talking to his dad from the other side of the sliding glass patio door. 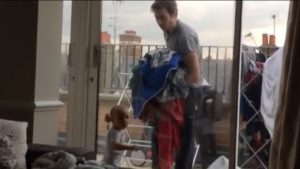 As the baby converses with his dad he starts to become super animated, pointing his finger all around their home and loudly expressing himself through baby babbles.

At one point, the baby has his finger pointed behind him towards his mother who is filming and his dad says to him, “Yes, she’s a slave driver and it’s a good thing you know that now.” As soon as he says that, there is a look of pure shock on the baby’s face as he turns and looks at his mother – it’s almost as if he actually understood his father! 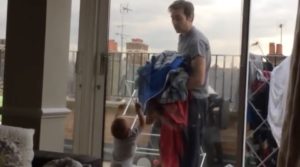 Throughout the video the father has a debate over things like moving out and needing to do the laundry. This baby boy does not miss a beat and patiently waits to respond with his dramatic babbles until his dad is finished speaking. The whole video is hilarious and definitely one you will not want to miss!