In all the years Carly Dunham has been raising and showing livestock, she’s never wanted to sell an animal as badly as her pig, Blake.

But it wasn’t about monetary gain for the Michigan teen. It was about helping a family in desperate need of support. Dana Saboo, a local mom of four, has been battling stage four stomach cancer this year. And when the 17-year-old heard her story, she felt compelled to act.

Carly spent months getting the pig ready for auction, hoping to donate all the proceeds toward Dana’s medical bills. Unfortunately, Blake wasn’t eligible for sale at the Montcalm County 4-H Livestock Auction in June. At 315 pounds, he was over the auction’s limit of 299. 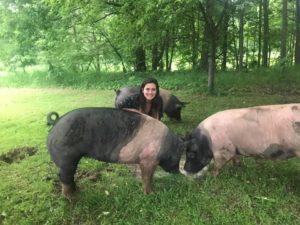 Carly couldn’t give up just yet, so she took a photo of Blake instead and explained her intent to the auctioneers… and they decided to make an exception! Before Carly took the stage and held up the pig’s photo, they relayed the Saboos’ story to the crowd. Jason Clark, one of the auction managers, detailed the beautiful acts of kindness that followed.

Most hogs were selling between $2.50 to $4 a pound, he wrote on Facebook, adding, “My first number was 5 bucks a pound and when about five hands went in the air I knew we were in business. When the bidding quit it sold for $24 a pound […] and the whole building exploded with cheering.”

Then, the company that won the bid donated the pig back to be sold again! The supermarket chain Meijer purchased Blake the second time around for $20 a pound. All in all, Carly raised nearly $14,000 for the Saboo family! Overwhelmed by such generosity, she barely held it together as the auction came to a close. 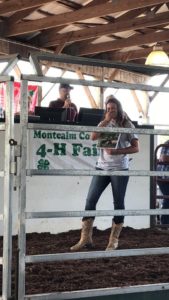 Dana’s husband Duke was even more grateful for the outpouring of support — but especially for Carly, who started it in the first place.

“Carly, thanks doesn’t seem enough for what you did with your pig,” Duke wrote in a heartfelt Facebook post. “You make me want to be a better person, everyone that does something for the family does. We can’t say thank you enough, the community has surrounded us and let us know that you are in this fight too.” 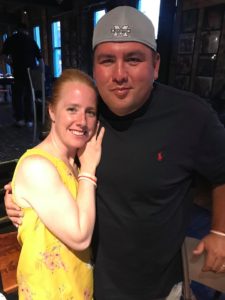 Dana is still fighting with everything she has, but these days, things are looking up for the family. We’ll be keeping this strong woman in our thoughts as she continues her battle.

There is nothing good about cancer. Seeing what strangers will do for a family in need, on the other hand, is incredibly uplifting. Spread the good by sharing this story.