Nobody is a bigger fan of BYU football than Michael, a man with special needs and a whole lot of love for the sport.

Members of the Utah team say that for as long as they can remember, Michael and his father have shown up to every practice to watch and support their favorite college athletes. So, as a small token of thanks, all the players decided to treat their number one fan with an experience he’ll never forget. 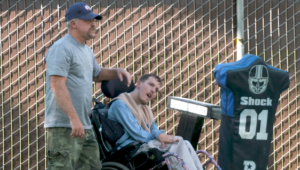 Player Kyle Griffins says it was Coach Steve Clark who came up with the idea during a recent practice. “He’s like, ‘Hey, you guys should do something with him. That’d be really cool. That’d be really special.'” Kyle said. “‘He’s here every single day. He’s always by the tight ends.'”

So, Kyle approached the father and son, inviting Michael onto the field to run a play with the team. Of course, his answer was yes — as evidenced by the huge smile plastered to his face. 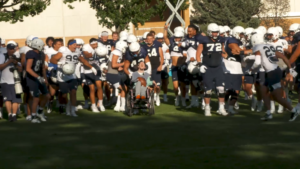 Michael held the ball in his lap as one player pushed him toward the end zone. Others ran by his side occasionally jumping out in front feining being tackled by Michael. The way his face lit up said everything about how he felt in that moment. 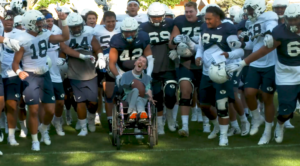 And when he scored, the cheers from the Cougars were deafening. But even “louder” was the pure joy emanating from Michael, who clearly just experienced one of the best moments of his life. 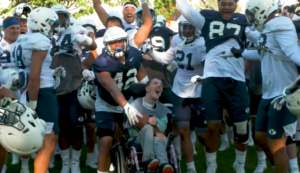 BYU Football uploaded a video of Michael’s special moment to Facebook and thousands were touched by the footage, including Michael’s own family members, who say they were brought to tears. 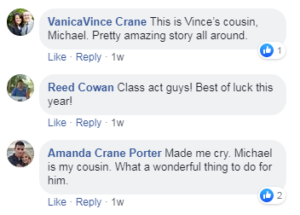 Now that’s how you thank your fans! Clearly, this team is made up of class acts who not only love what they do, but appreciate the people who support them the most. Great job, Cougars!

Watch as Michael scores a touchdown wearing the biggest grin ever in the video below, and be sure to share.

Thanks for your support Michael!!

Thanks for your support Michael!!#BYUFOOTBALL #GoCougs