Brady Campbell and his dad, Brandon, had big plans for the summer. That was before cancer took the six-year-old’s hero away forever.

The father and son from Stapleton, Colorado, always talked about opening a lemonade stand, but tragically, they never got the chance to do it together. They’d had everything set up and ready to go. Then Brandon succumbed to the devastating disease just a day before they planned to open for business. 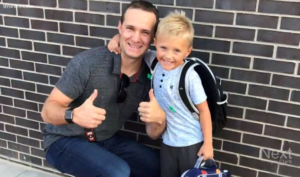 Nobody expected Brady to want to run the stand after suffering such a loss. But as the little boy explained to his mother, he was going to do it anyway to honor his dad — and earn enough money to take her on a date. 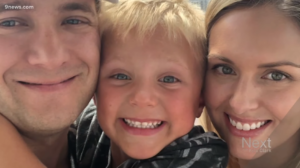 So, the day after his father’s untimely death, Brady set up the signs Brandon helped him make and got his pitcher ready, all the while wearing a brave smile. None of his patrons knew what he’d been through in the last 24 hours until a Denver police officer stopped by and heard his story. 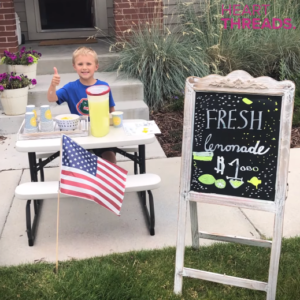 He couldn’t pass up any chance to brighten the boy’s day, even just a little. So he called for reinforcements. He got in touch with fellow cops via his radio, who spread the word to local firefighters and emergency responders. And the turnout was incredible. 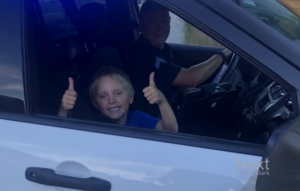 Soon, firefighters, police officers, and neighbors showed up in droves, lining up down the block for a glass of lemonade. 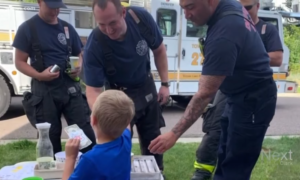 Brady’s business venture quickly turned into a neighborhood celebration, during which the little boy got to climb inside a cop car, ride a firetruck crane, and spray a hose. There wasn’t one moment he felt alone — as evidenced by the permanent grin plastered to his face. 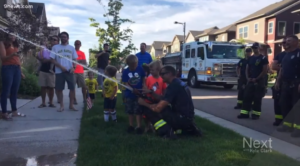 Brady’s mom says words can’t describe what this day meant to her son. After losing his world, Brady still found a reason to smile thanks to everyone who was there for him when he needed it the most. 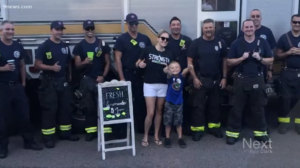 Watch as an entire community comes through for a grieving boy in the video below, and share to inspire more acts of kindness.

6-year-old Brady and his father always wanted to open a lemonade stand together. But when his dad passed away, Brady decided to open the stand on his own. Thanks to community members like firefighters and police, the stand was a great success. via HeartThreads