Like any young football fan, Andrew Marsh has dreamed of scoring a touchdown for years. But that special victory has always seemed impossible to reach.

The 8-year-old lives with a number of tough conditions that limit his mobility, including severe scoliosis, kyphosis, and muscular dystrophy. He’s had multiple surgeries, but his physical restrictions still make it difficult — if not impossible — for him to play sports. Still, he never lost hope that someday he would be part of a team. 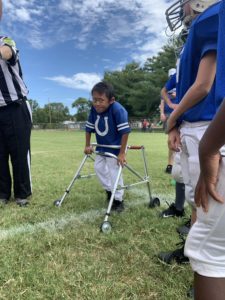 So when his 6-year-old sister Katie joined the sports world without him, he was understandably hurt. He shared his sadness with his best friend Lucas Haag, who decided to do something to make Andrew feel better.

Lucas’ dad coaches the Evansville Junior Football League in Indiana, and when Justin learned about Andrew’s situation from Lucas, he immediately reached out to Kimberly, the little boy’s mom, with a sweet offer: He wanted to make Andrew an honorary member of his team.

Andrew, of course, was thrilled. He became the Colts’ equipment manager — and turned out to be a key influence they never realized they needed. Justin now calls him their “rallying point.”

“You get kids that sometimes lack motivation, and Andrew would love to be out there,” Justin said. “You plant that seed with the kid that, ‘Hey, Andrew would be out there if he could.’ And it fires kids up.” 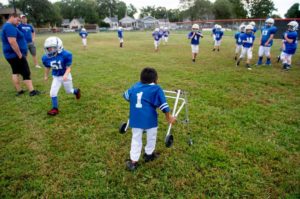 To thank Andrew for being one of their rocks, the team planned something amazing during their game against the Broncos at Howell Park. They brought Andrew out during the first play, all suited up and ready for action. Then they stood next to him, controlling the right side of his walker so he could hold the ball and make his way to the end zone. 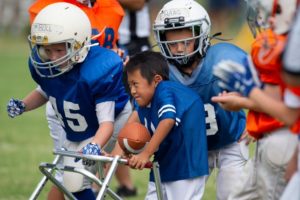 Hundreds stood on the sidelines to cheer Andrew on, including his friends, his physical therapy team, and his proud mom, who couldn’t help but tear up. “It’s something we didn’t think Andrew would ever get to experience,” she said. “To have it come to reality is just very emotional and very exciting.”

When Andrew scored the touchdown, the crowd went wild! Both teams celebrated, not caring about their rivalry because the moment had become about so much more than football.

While Andrew was shy around the news crews recording his win, his smile said it all. 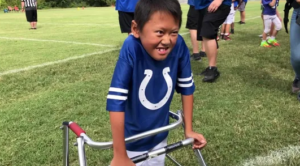 Andrew’s parents don’t know what the future holds for him. But as far as sports are concerned, he’ll always have a team where he belongs. At this point, they wouldn’t be complete without him. Congratulations, Andrew!

Watch as the little boy lives out his dream in the video, and spread the joy by sharing!