On any given day, technology can be either a blessing or a curse.

In the weeks leading up to the birth of his second child, Zach Garrett was intent on keeping his family members up to date. His grandmother Beverly Garrett was so excited that she started a group chat, adding Zach’s current phone number and what turned out to be an old number that Zach no longer owned. 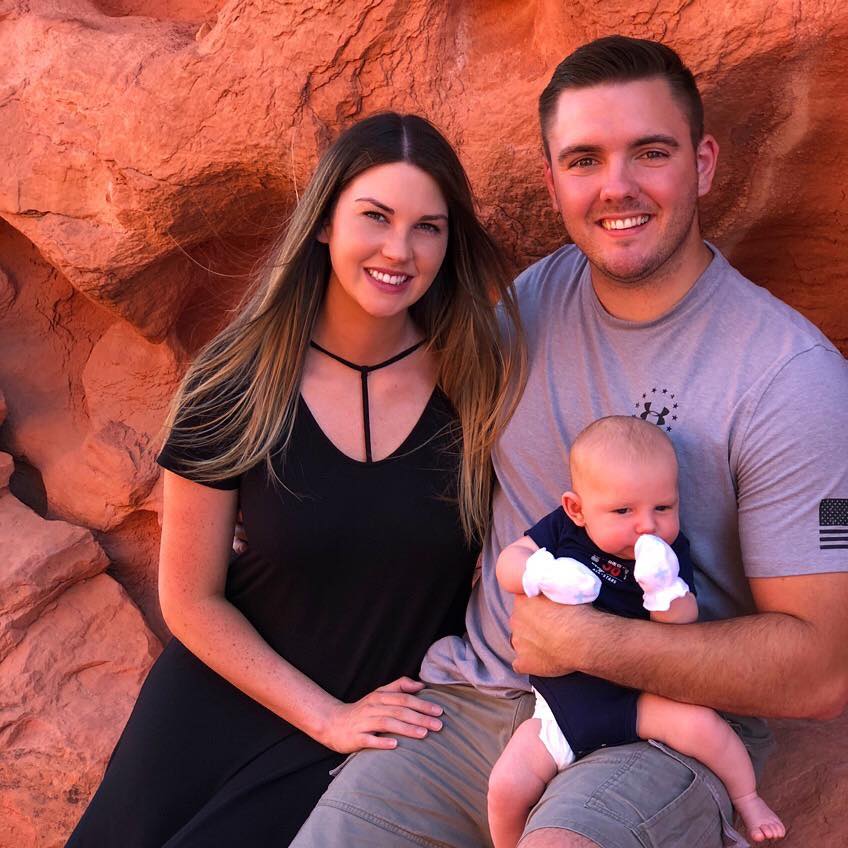 No one noticed the error for weeks as Zach texted back and forth with Beverly. Bobby Watson of Malvern, Arkansaw, is the owner of Zach’s old number, and as he watched the texts come in he assumed they were from a family member of his who is also named Zach. Thinking he’d missed out on a big announcement about a new baby joining his family, Bobby kept quiet until the big day, when Zach texted his grandma a picture of wife Sierra in the hospital before having their baby. That’s when Bobby realized they weren’t actually related. 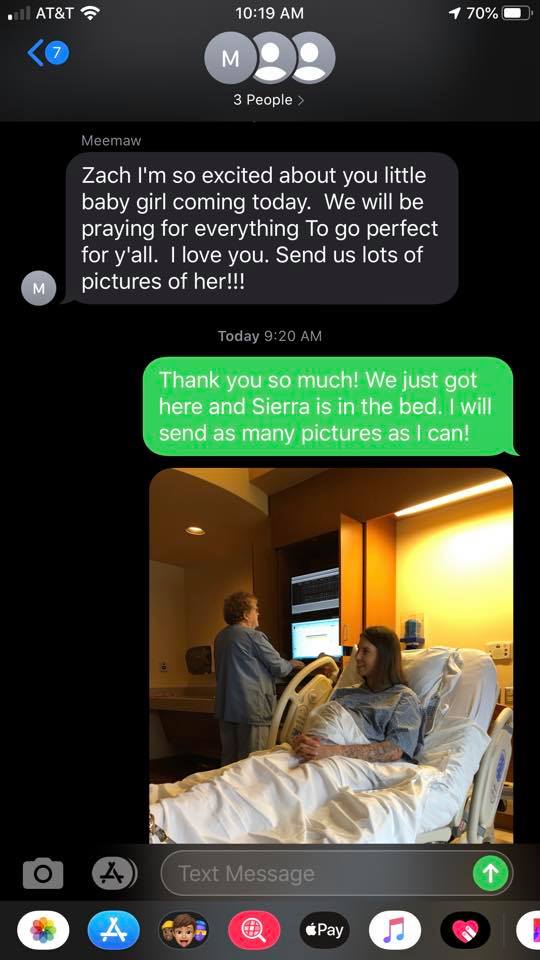 “I couldn’t resist inserting myself,” Bobby said. “I felt it would make them laugh while already being in a joyful mood.”

Seconds after Beverly and Bobby got the picture of Sierra in the hospital bed, Bobby snapped a selfie and texted it to the group. “Don’t know how I got added to the group, cause I don’t think I know anyone in it!” Bobby replied. “LOL But anywho CONGRATS ZACH!!! My name is Bobby by the way, shoot me your cashapp info and I will donate to the diapers!!!” 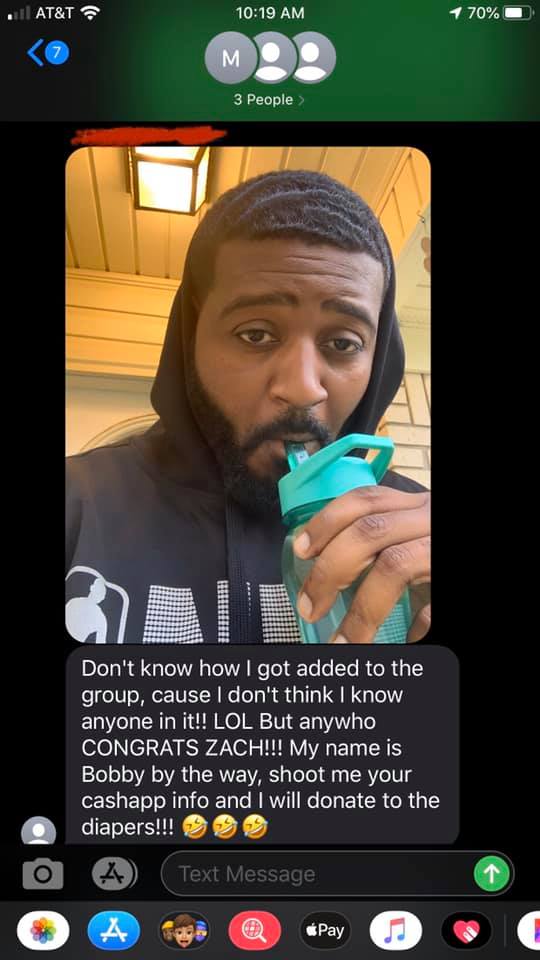 Can you believe how cool this guy is? Instead of being upset at the intrusion he offered to buy them some diapers! Bobby later followed through, sending the family $50 to get them started. Zach admits he was feeling pretty sheepish when he realized he and his grandmother had been chatting in front of this total stranger, but Bobby’s sweet response made him feel a lot better about things.

“When we first heard from him I was a little embarrassed … but his selfie brought so much humor to the situation. We all had a good laugh! Bobby could have been really rude or told us to take him out of our chat but he didn’t. He was so nice about it.” 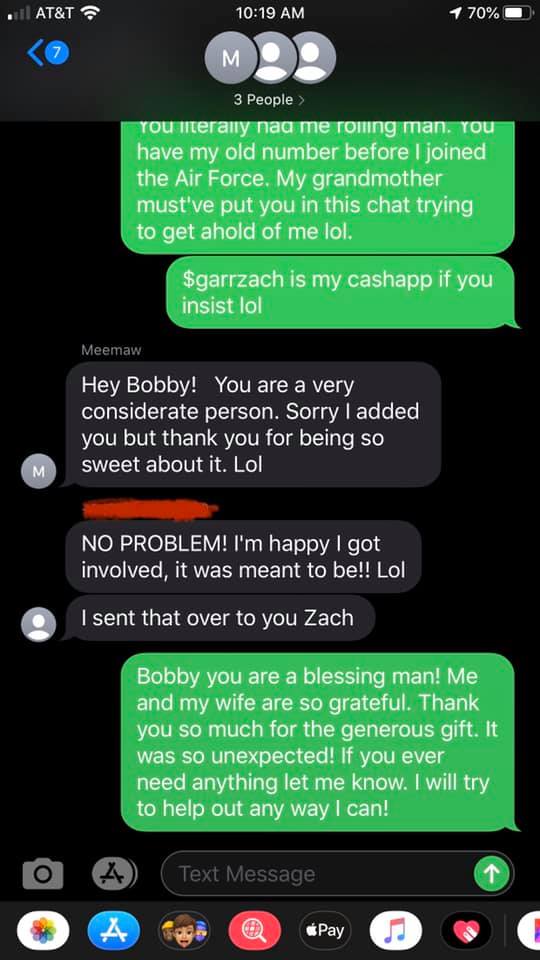 Zach was so amused and touched by the gesture that he shared the whole exchange on Facebook, where it went viral. Incredibly, other people then decided to contribute to the diaper fund too, resulting in over $700 in donations by total strangers!

Zach was surprised when the post went viral, but says, “I think people like the story so much because it was a real interaction between strangers that shows no matter race or gender people can be good to one another.” 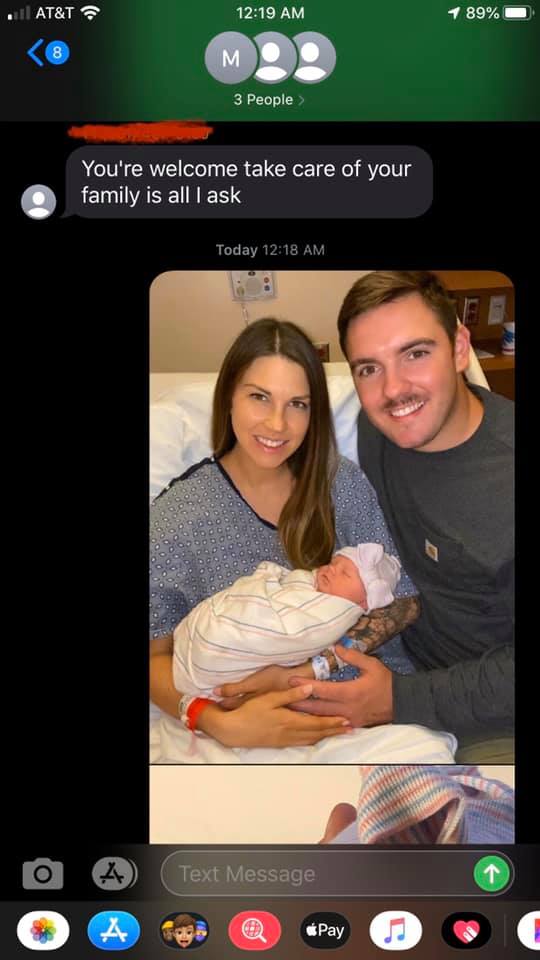 Bobby is our new hero! There are a lot of different ways to handle a random text message from a stranger, and Bobby chose kindness. Thanks to his example many others stepped up to heap blessings on this young family. Thank you for handling this so perfectly, Bobby!

Have you ever received a text by mistake? Share this story to start the conversation with your friends.