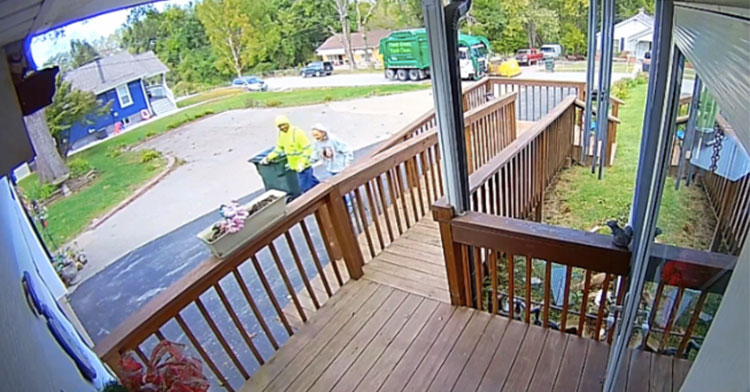 Small kindnesses have so much bigger of an impact than we think they do.

When Colette Kingston of Missouri had a Ring security camera installed at her mother’s house, her goal was simple: to keep track of 88-year-old Opal Zucca, who has dementia. What she got instead was evidence of a beautiful friendship. 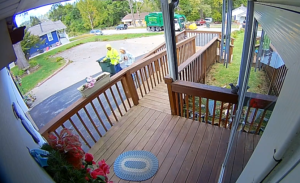 In January, Opal was trying to bring her trash can up the driveway when she fell and hit her head. Waste Management employee Billy Shelby, who’s been driving the company’s garbage trucks for four years, watched it happen. Ever since then, he’s taken it upon himself to keep her safe.

Now every time he comes by, Billy pulls Opal’s bin up for her. Colette had no idea this was going on — until she saw one of his acts of kindness in a Ring recording months later.  Moved, she decided to share the video on Facebook.

“This was him today helping her; he demonstrates such care for her,” she wrote. “Such a small kind gesture but leaves an enormous relief for us. Thank you, kind sir.” 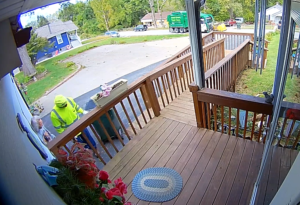 In the video, Opal and Billy can be seen walking up her driveway holding hands. After rolling the trash can into its usual spot, Billy hugs Opal and tells her it was nice to see her.

“You are looking good,” he adds before going on his way. “I like that hair. You got it down. I got to work on mine.” 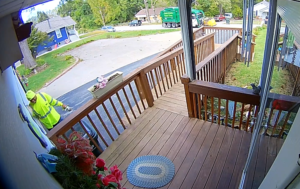 The video quickly went viral, and Billy was shocked to see he’d made headlines. Even more touching was the moment Colette and her siblings finally got to thank him in person. 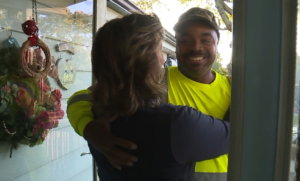 Billy said he was just doing his job. After all, he loves people, and seeing Opal is the best part of his day. Clearly, the feeling is mutual.

“It’s just so sweet that somebody that doesn’t have any gain in this would be just extra nice to her,” Colette said. “It just reminds you that there are still a whole lot of good people out there.” 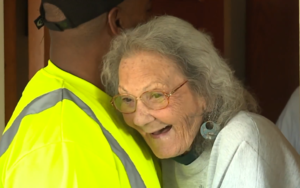 Long before he received any credit for his kindness, Billy was making the world a better place. We’re so impressed that he’s gone out of his way to make his friend safer. Keep up the great work!

Watch as Billy helps his favorite customer in the video below, and share to spread the love.

In January, my mom fell while trying to bring the trash can back up her driveway and got hurt. This gentleman from WasteManagement was there when it happened. Ever since, he has brought the can back up the driveway for mom. This was him today helping her; he demonstrates such care for her. It takes a village – such a small kind gesture but leaves a enormous relief for us. Thank you kind sir. Love, the Zucca family.