Bess’s first stroke of luck came when she was picked up off the streets in Tennessee.

Fortunately, her situation only improved from there, because if there were ever a dog who could use an extra hand or two, or 26, it was Bess. The average litter for a dog her size is between six and eight, but she was pregnant with 12! 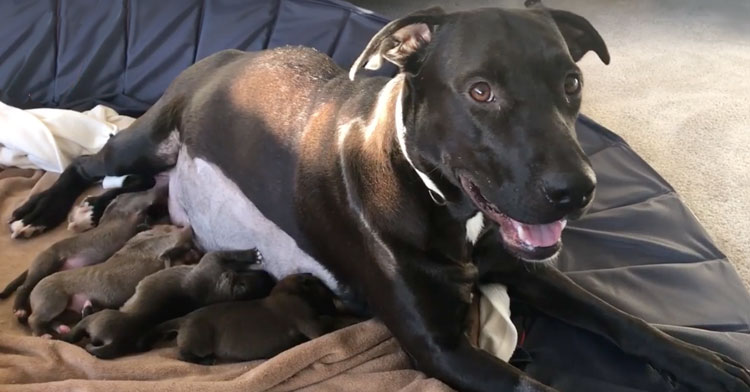 Giving birth to a normal-size litter is hard enough, so this labor was especially difficult. And it was even more so when Burrdie, who turned out to be the runt of the litter, ended up blocking the birth canal for several hours straight.

“The doctors came out and told us that there was a chance that, because there were so many puppies, they probably weren’t all going to make it,” said Vyolet Jean Savage, one of the caregivers for the massive brood. 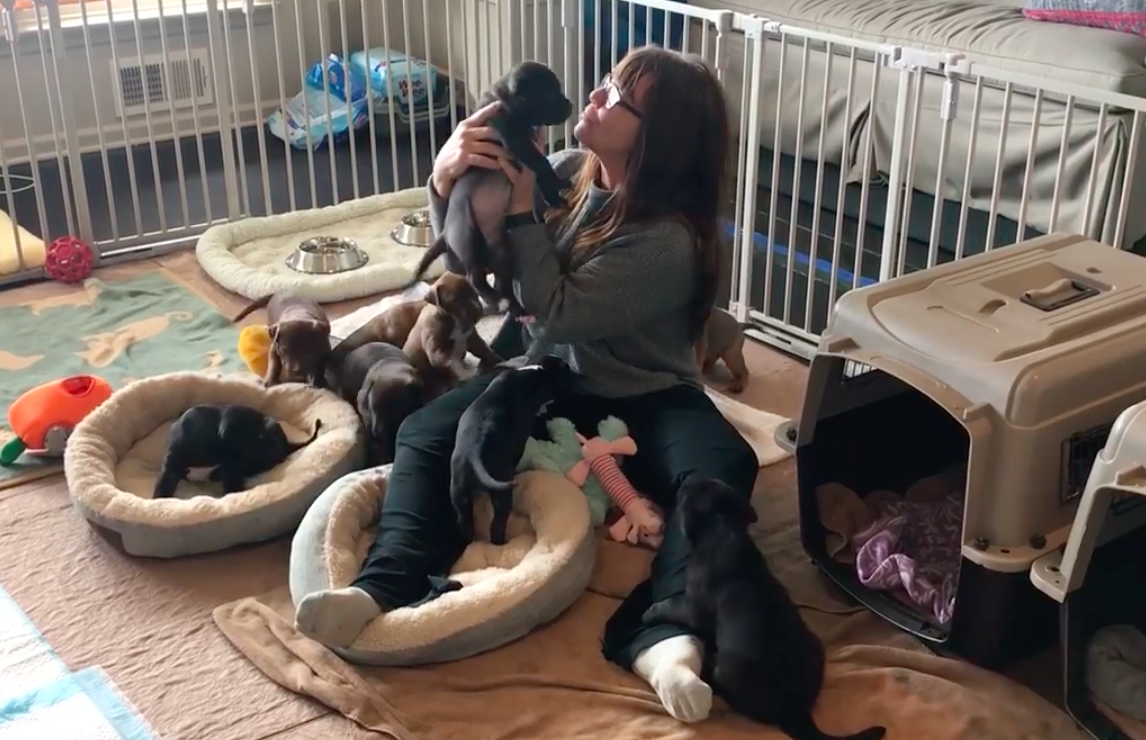 “That just wasn’t an option,” added Tracey Stewart, who, with her husband comedian Jon Stewart, runs a 45-acre sanctuary and sustainable farm in Colts Neck, New Jersey. “We decided to bring all the puppies back to my house. I had to tell my husband that we were going to have to take out the living room furniture, the dining room furniture…” 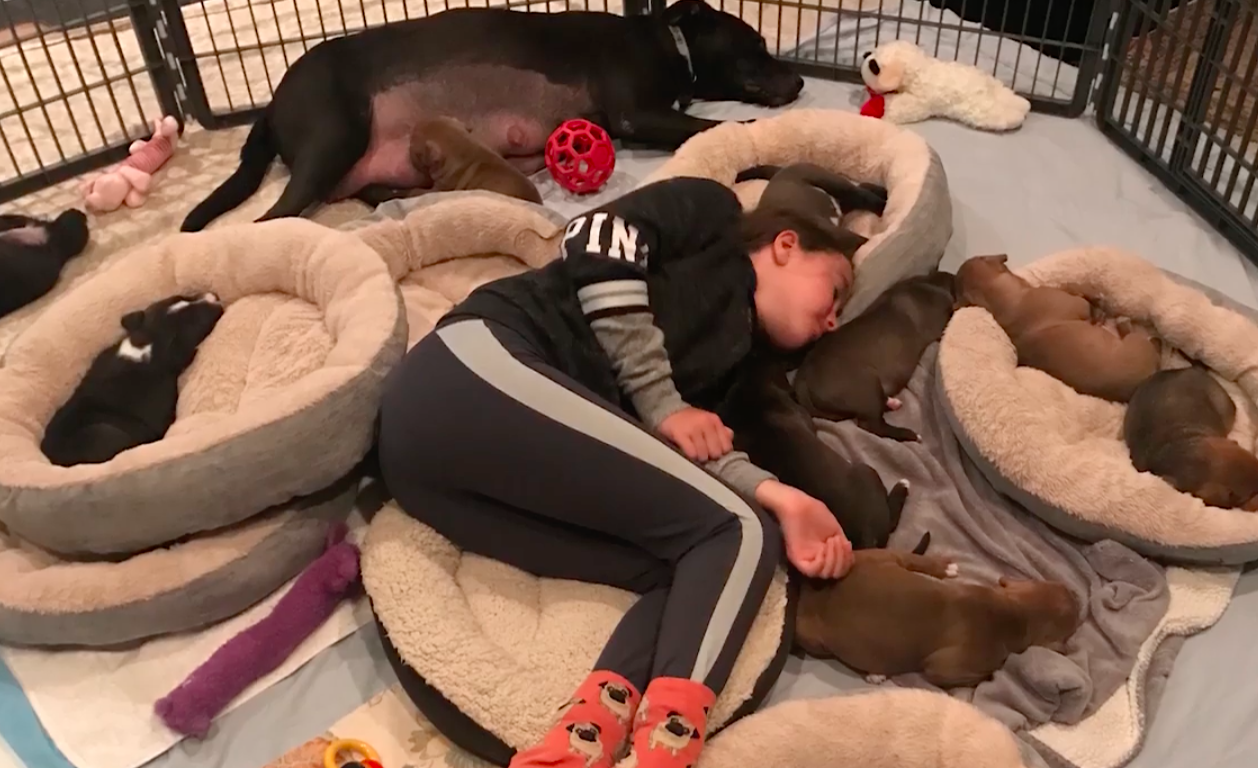 It didn’t take long for these kindhearted souls to realize they were in over their heads and call in for reinforcements.

But they had a whole cadre of volunteers who were at the ready, at they worked in shifts for weeks, ensuring everyone received around-the-clock care and monitoring so they all remained healthy and strong, and the pups developed without complications. 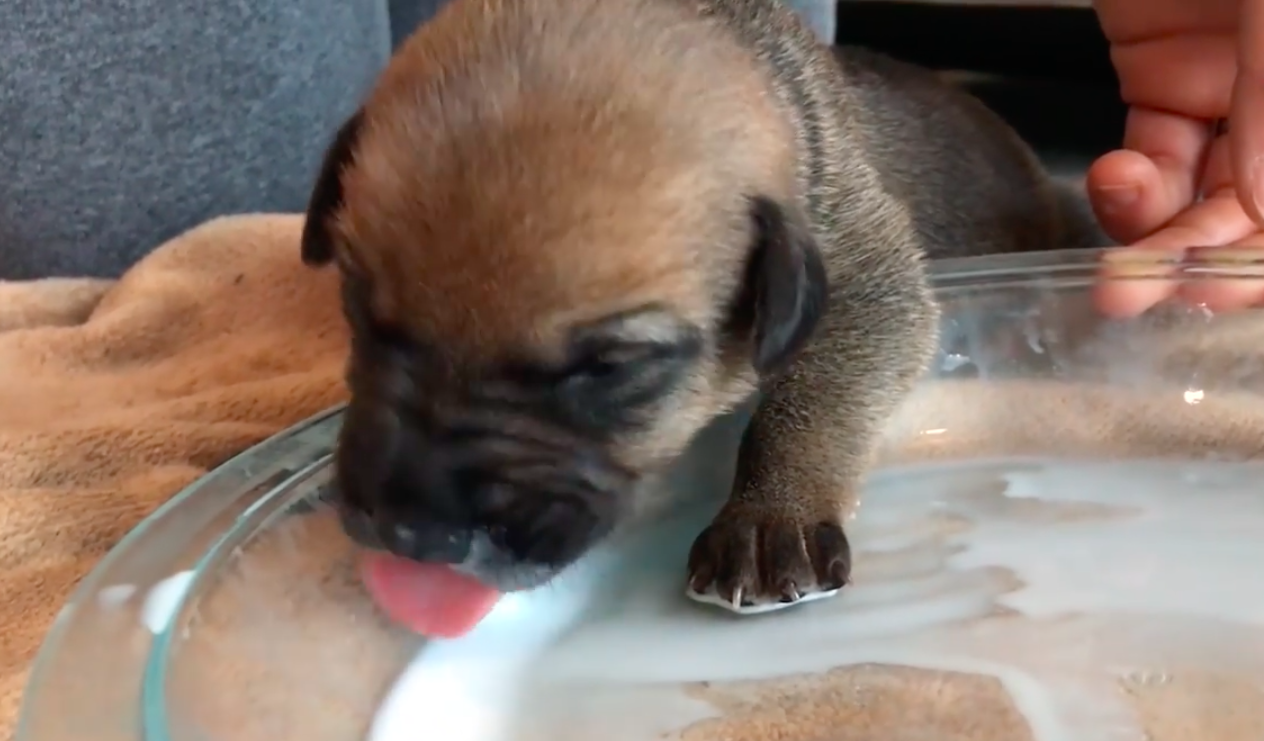 The only one who gave them pause was Burrdie, the little runt who’d had such a difficult time getting through the birth canal. They needed to make sure she received extra milk and extra care, so they tied a little pink ribbon around her neck to serve as a reminder, and to distinguish her from her siblings. 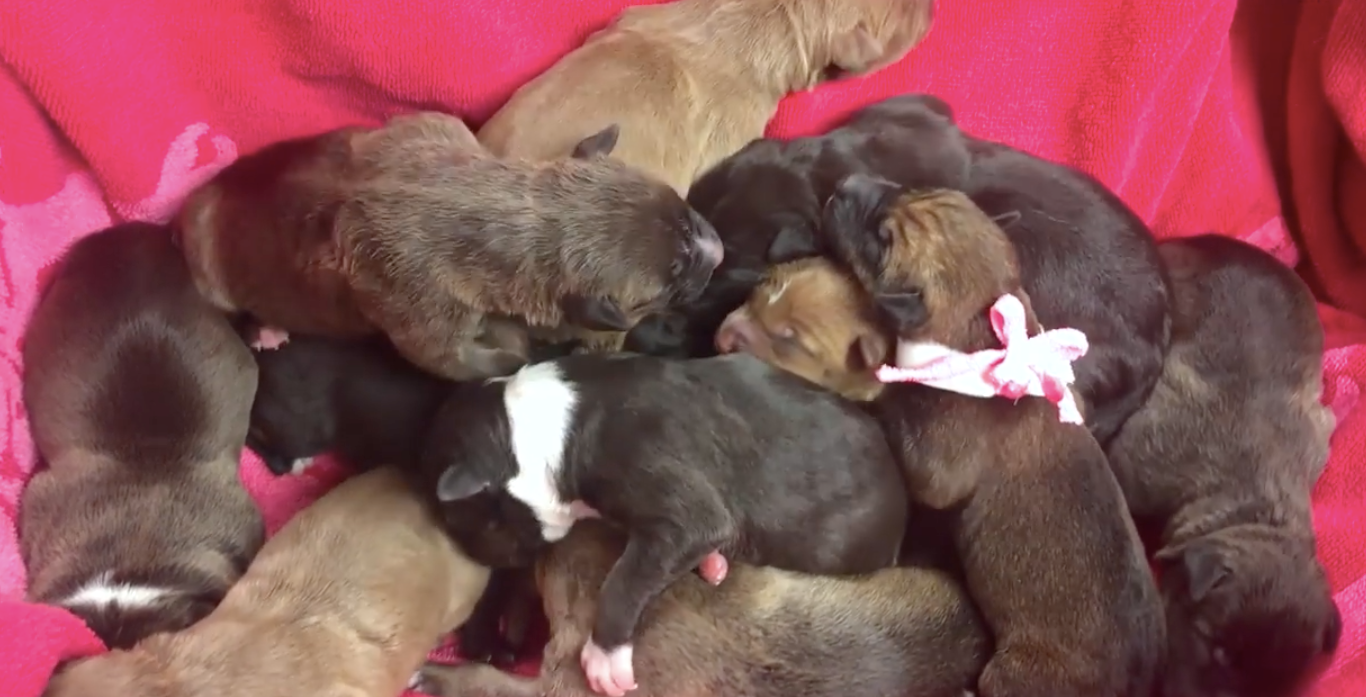 Bess was so patient and so gentle with all of her babies and she’s like a natural, perfect mom. Even times when she was just exhausted, she cared where they were. If she heard them making a sound, she was very attentive to them.

In these kinds of situations, once the litter’s been weaned and ready to be adopted, the puppies are almost always the first to go. But in this case, Bess was the first one to find a new home! Her new mom, Susan Zaleski, said the family knew from the moment they saw her that “this was our dog,” and described her as a four-legged nanny with a strong motherly instinct. 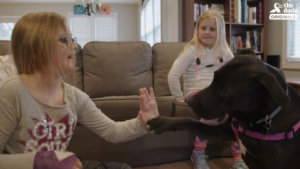 It’s no wonder that motherly instinct was in full effect. She’d just left a home that was brimming over with puppies! But as the months went by, she settled in to her new home and bonded with her human sisters until she took them on as her new responsibilities. Meanwhile, all of the puppies who she’d fussed over so lovingly all those months ago were adopted by family and friends of the Stewarts’.

As anyone with a large family knows, getting everyone together for a reunion is no easy feat. But 10 months after the group was split up, Mom and the puppies were all brought back together to celebrate the litter’s one-year birthday! 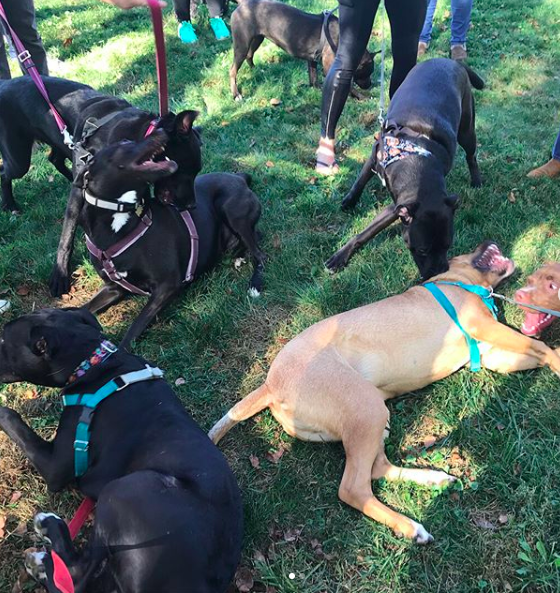 Bess couldn’t have been happier to see her babies doing so well in their new homes, and it definitely shows as she nearly pulls the leash out of her handler’s hands, trying to get to them all.

Watch the video below to see the reunion and everyone’s reactions when they catch all those familiar whiffs, and the special bond that still remains between Mom and Burrdie.

It just goes to show, a mother’s love is truly for forever. Share to spread the happiness around!

A sweet dog named Bess was found pregnant as a stray, and the perfect foster family stepped up to help her raise her 12 babies. Burrdie was the runt of the litter and needed lots of extra TLC. Today on Reunited, watch the whole family find loving forever homes — and reunite once the puppies are all grown up! The moment Bess sees Burrdie again is pure magic 💞