The Backstreet Boys have many, many admirers. But one group of special-needs adults from Louisville, Kentucky, are clearly some of their biggest.

Down Syndrome of Louisville is an organization dedicated to serving and empowering people with the genetic disorder. It’s also comprised of the most enthusiastic BSB fans out there. They’ve been dying for a chance to meet their favorite boy band. But they didn’t expect a fun idea for a music video would make it happen. 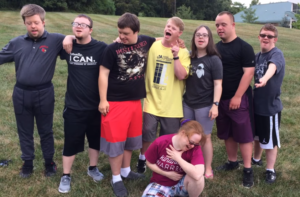 Back in August, the group uploaded an adorable video to YouTube of its members lip-syncing and jamming out to the popular hit, “I Want It That Way.” While it was mostly meant for their friends and family to enjoy, it ended up catching the attention of a very important person — Nick Carter himself!

Not only did Carter tweet that he loved the video, but he invited the group to BSB’s “DNA World Tour” concert at Louisville’s KFC Yum! Center — and a private meet-and-greet before the show!

Kevin Richardson also sent the group a personal video message, gushing, “The passion, the joy, the soul that you put in that video was inspiring.”

“There were screams, one of them actually fell on the floor,” Julie Torzewski, the group’s executive director, told CNN. “They’re uninhibited in their emotions, this is what makes them so special. They just embraced the moment, it brought them so much joy.” 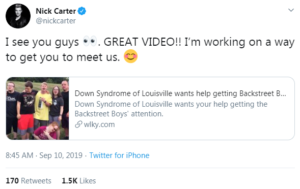 More screams and shrieks could be heard the day of the concert as 12 of the organization’s members, ranging in age from 18 to 40, met face-to-face with their idols. 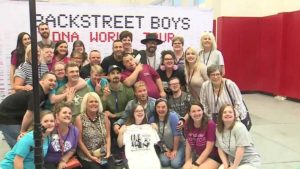 The new friends posed for photos together… 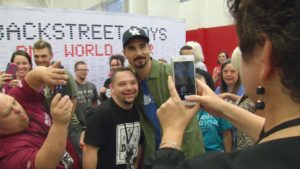 …sang some of the band’s most popular hits… 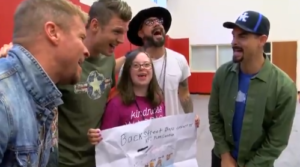 …and simply connected with each other. And the people of Down Syndrome of Louisville weren’t the only ones who had an unforgettable experience. Afterwards, Carter tweeted, “It was so awesome to meet you. Told ya I’d make it happen.” 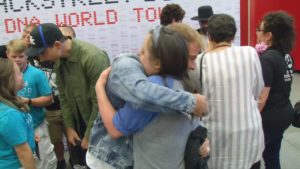 Check out more footage from the meet-and-greet below. Share to celebrate the five wonderful men who always go above and beyond for their fans.