For many of us, a nice breakfast with our family doesn’t stand out as particularly memorable.

But that wasn’t the case for Amy Pettenato. The morning she headed to Metropolis Diner in Medford, New York, marked a painful milestone for her, but thankfully, a stranger would completely turn her day around! 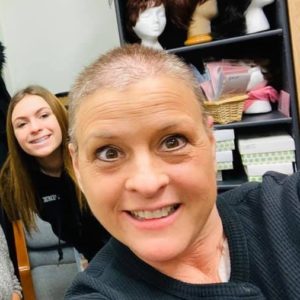 Diagnosed with stage I breast cancer in May, Amy had already endured a double mastectomy and reconstructive surgery when life threw another curveball her way. She lost kidney function and had to do chemotherapy and dialysis at the same time. On top of all that, the mom works full time.

To say things have been tough for the Pettenatos is an understatement. And for Amy, going out in public for the first time after shaving her head was overwhelming. “Throughout my whole journey, I’d stayed positive,” she said. “But that made me depressed.”

Still, she was excited to share a meal with her husband and daughter… until she caught the attention of a nearby family. As soon as Amy noticed a little girl was watching her, she became extremely self-conscious. 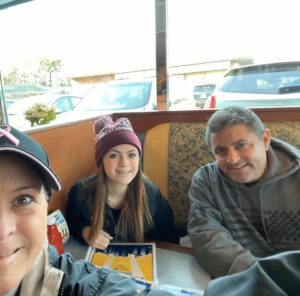 But things aren’t always what they seem! Before the little girl’s family left the diner, her mom approached Amy to share her own story. As it turned out, the stranger was a 13-year breast cancer survivor. “We talked for a bit, and she wished me luck with everything I’m going through and reminded me to stay positive,” Amy wrote.

That would have been moving by itself, but when the stranger left and the Pettenatos asked for their check, their server told them their meal had already been paid for. We’re sure you can guess who covered the bill!

Amy was deeply moved: “She was an angel sent here to let me know, ‘We’ve got you.'” 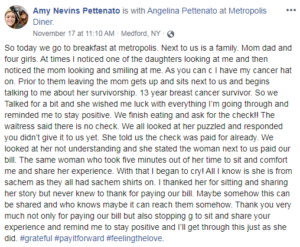 While Amy didn’t get a chance to thank the kind stranger that day, she was determined to find her. So she asked for help on Facebook, and it worked! Thousands of people shared her post, which eventually made its way to Kerry Holmes-Vallario’s online moms’ group.

As soon as Kerry saw it, she reached out. It didn’t take long for the two strangers to become friends, forever “bonded as pink sisters.” Of course, as Kerry explained, they always had been.

When I saw her I knew exactly what she was feeling — I remember the day my husband shaved my head; it was the hardest day of my life. When I saw her sitting there, I just wanted her to know that she isn’t alone in her fight and that ‘we’ as warriors are all here for each other. On my journey I had met so many women who became friends from this disease, and I wanted to just reach out to Amy and let her know I was there for her. 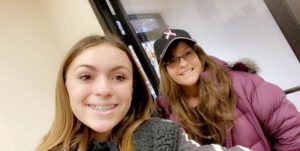 Amy said she plans to be someone else’s Kerry after she’s completed her journey. In the meantime, she’ll keep her dear friend’s words in mind as she continues her battle. Stay strong, Amy! We’re sending all our love to you and your family.

Share this story to spread support for the Pettenato family.