If there’s one dog breed you don’t want to get in an argument with, it’s a husky. (And this goat.)

Maybe the reason they always have a lot to say is because they come from the snowy climes of Siberia, and talking is always a good way to burn off some energy when the humanfolk can’t bring themselves to brave the cold. But whatever the reason, they’re a chatty bunch, and you’re going to waste a lot of time trying to get the last word. 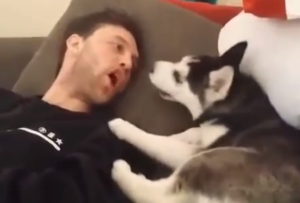 Exhibit A: Aaron Dissell and his friend Michelle Knight’s husky, Sky. This video starts somewhere mid-argument, so we’re not exactly sure what the beef’s about. But whatever it is, they’re both equally passionate about where they stand, and neither appears willing to give ground any time soon.

“You better stop,” Aaron warns while Sky continues chattering away. But she’s too young to know when to leave well enough alone, and when she finally crosses the line, Aaron yells, “What?!” 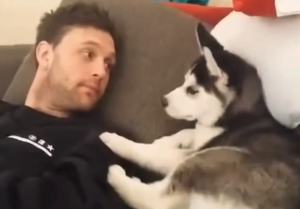 There’s nothing more challenging than getting into a heated debate with a seasoned veteran, one who can make their points clearly and concisely and volley back shots almost instantaneously. And Aaron has proved himself a worthy opponent. It seems he’s won this round.

“You always gotta have the frickin’ last word!”

Apparently, Sky just paused to come up with a good zinger and the argument gets back on track… until Aaron throws out a low blow, pointing out that she’s “still a baby” who has no place talking back to an adult. It’s a tactic adults often use when they’re on the losing end of a debate, or they’re just tired of arguing, and it usually shuts their opponents down pretty quickly since they can’t really argue that point. And Sky does settle down after that, but the hilarity continues during the silent tantrum that follows: 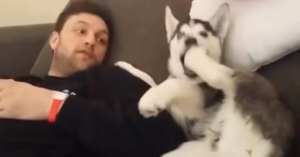 This hilarious debate has made millions of people laugh since it was filmed a few years ago, and we’re sure it’ll get a chuckle out of you, too. Check it out in the clip below, and don’t forget to share with all your husky loving friends!