As we stuffed ourselves at barbecues and watched dazzling fireworks light up the sky this Fourth of July, we celebrated our independence with our families by our sides. Unfortunately, not everyone got to be with their loved ones.

We’re lucky enough to live in a country where we enjoy many freedoms, and honestly, we sometimes take them for granted. It’s important to keep in mind those who sacrificed everything to protect our freedoms — a harsh reminder that hit David Darrow in the gut during his holiday travels. 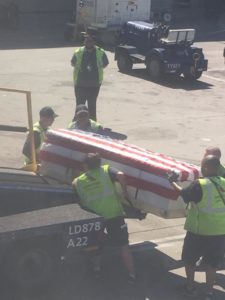 The man admits that before his flight from Phoenix to Charlotte on July 3, he “boarded highly aggravated and angry.” He grew even more frustrated when boarding stopped and the captain asked passengers to observe a moment of silence.

“I thought ‘Now what?’ And I got even more angry because I was going to miss my connection,” David wrote in a Facebook post. He just wanted to get to his family. Then he noticed the precious cargo outside. Airport employees were carefully loading a coffin draped with an American flag. 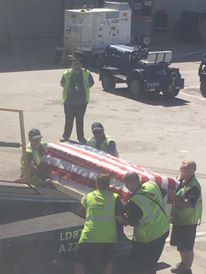 As the captain came out of the cockpit and tearfully told of the brave soldier who died in Afghanistan and was now being flown home to North Carolina, things were put into perspective for David.

“You see this is what the 4th [of] July is about,” he said. “It [is] about a sacrifice of men and women who since 1776 have laid down their lives so I can eat hot dogs and drink beer and watch fireworks.” 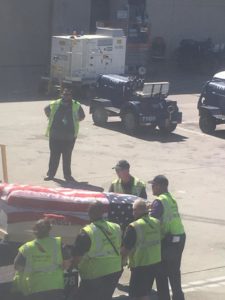 Everyone onboard cried for the man they’d never met. The atmosphere turned somber for the rest of the flight.

“I felt guilty and so sad,” David said. “My problems seemed trivial. Here I was flying home to be with my family for the 4th. Here he was going to [be] with his family to be buried on the 4th.” 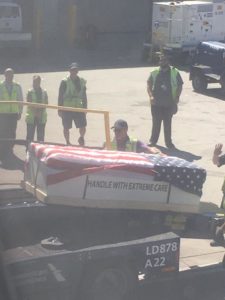 But by sharing what he’d witnessed, David hopes it will help everyone remember what’s most important about Independence Day.

“I wanted to share this because it is a 4th of July I will never forget. My problems melted away and I was so proud of America and American Airlines for showing so much respect. Please keep his family in your thoughts today. Because somewhere in North Carolina a family is burying their son, dad, brother, sisters, and his mother are saying goodbye today.”

To the unnamed soldier who died for his country, we thank you so much for your service and sacrifice. May you rest in peace, and may your family find peace as well.

Share this story to spread David’s message and honor our fallen heroes.

COVID-19 has canceled many major events, and this year's graduating seniors are feeling the loss. From high school to college, these students have been denied the rites of passage that...